Posted on October 17, 2009 by dreamsforpeace

Searching for the Balinese Religion 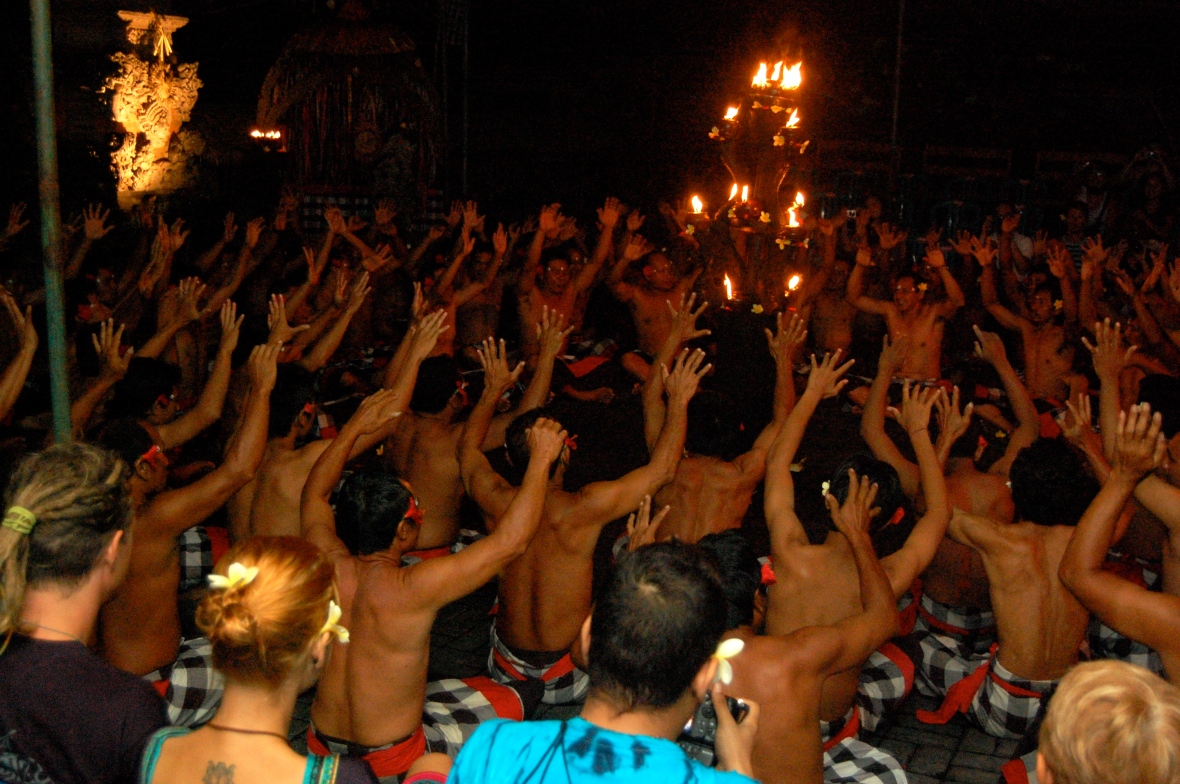 While most Hindus are celebrating Deepavalu, the festival of light,  we arrive in Bali during the time of Ganugan, which is their own special day.   Whether it be Deepavalu,  Chinese New Year, Christmas, or Hari Raya, the thing that is common about most religious and cultural larger than life days is that people make a huge attempt to be with their larger extended families in their home towns.  Religion seems to have this great power to bring families together.    Bali is no exception, maybe they are the rule. 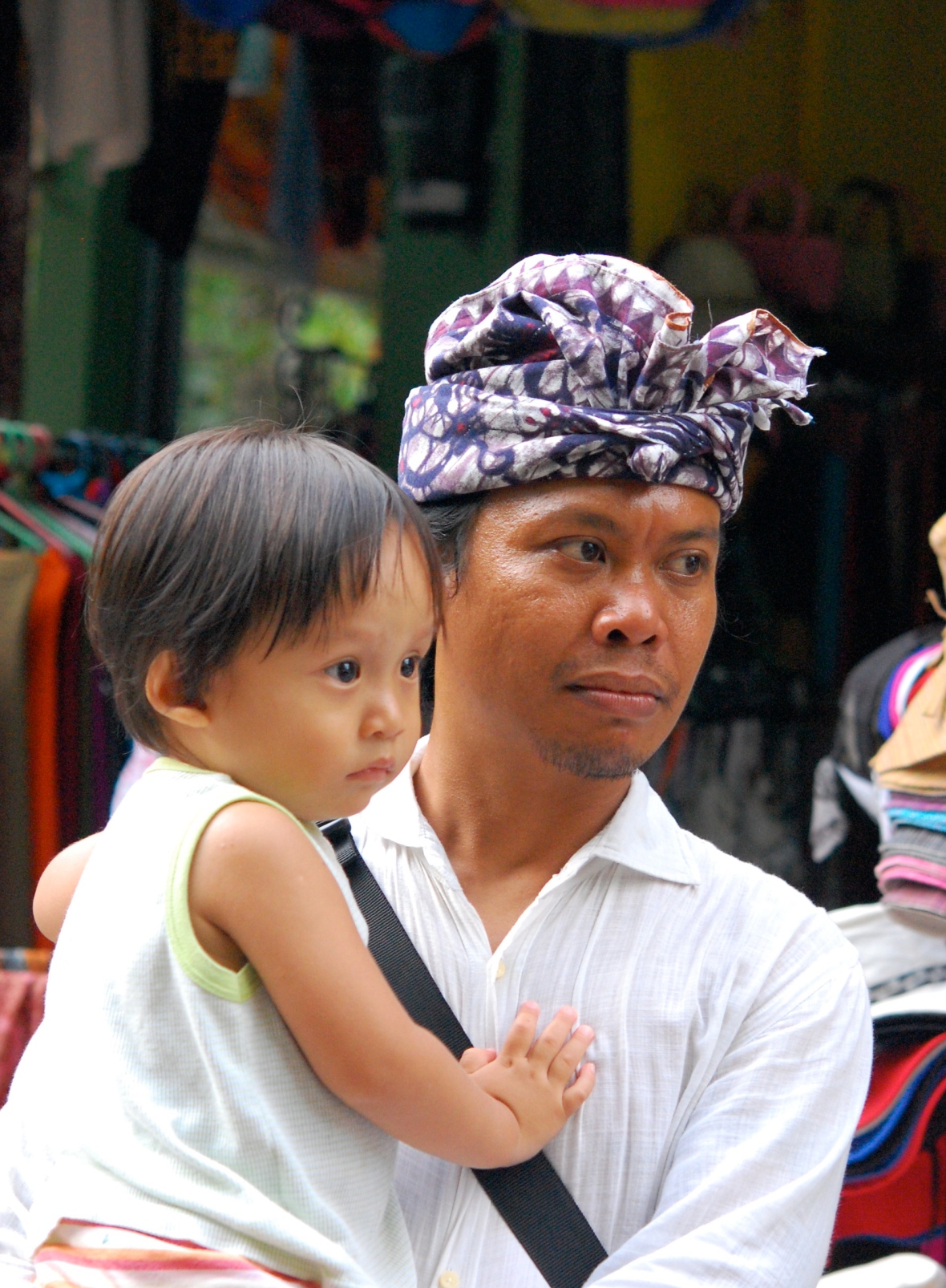 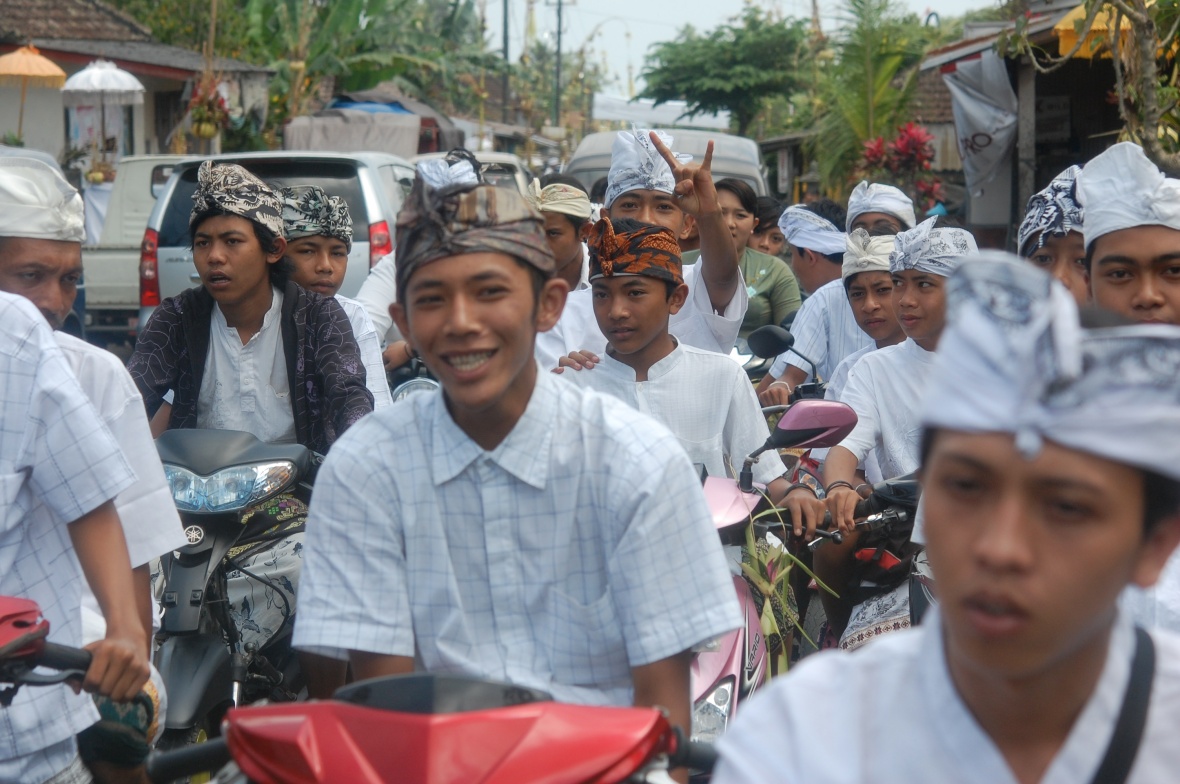 When we first ask about what Ganugan is to our first driver in Bali,  he explains that it is like a big birthday party for everyone that they have every 6 months.    There is always something special that you feel in Bali that is hard to explain,  but I am thinking that having a religious celebration that is like a birthday party for the entire country can’t be all bad even if you don’t agree with the tenets of the belief system. 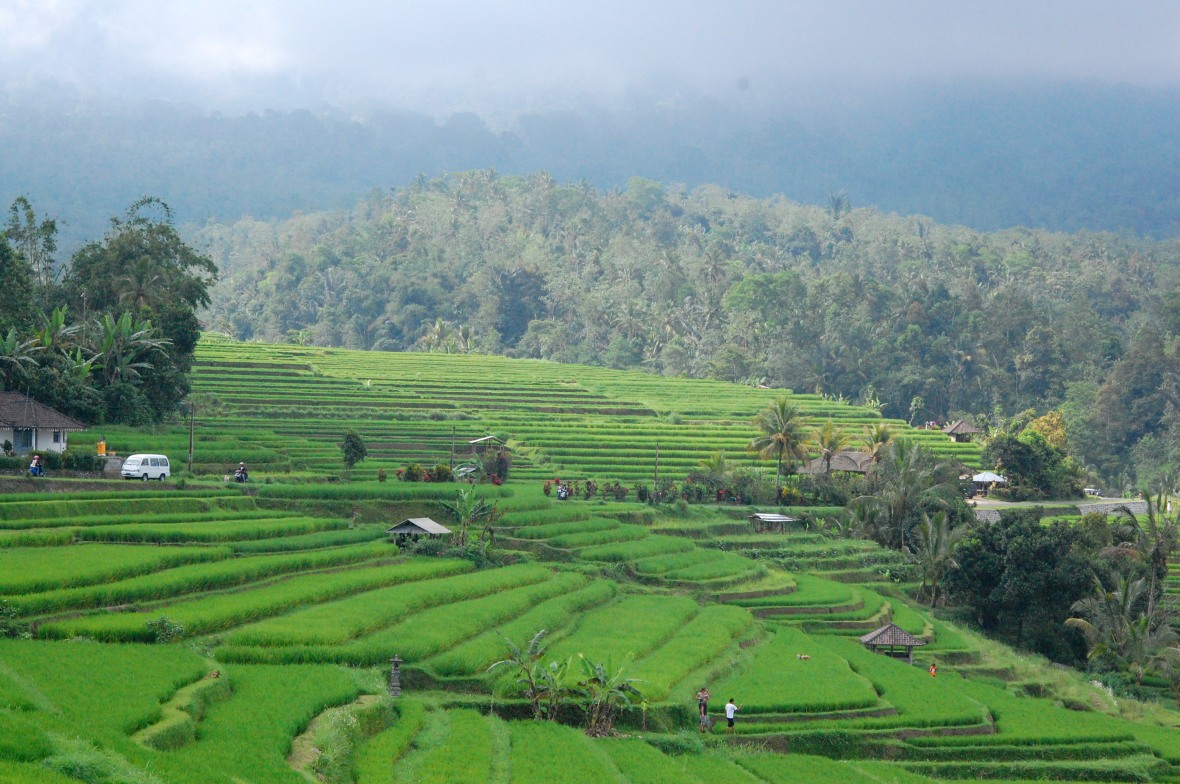 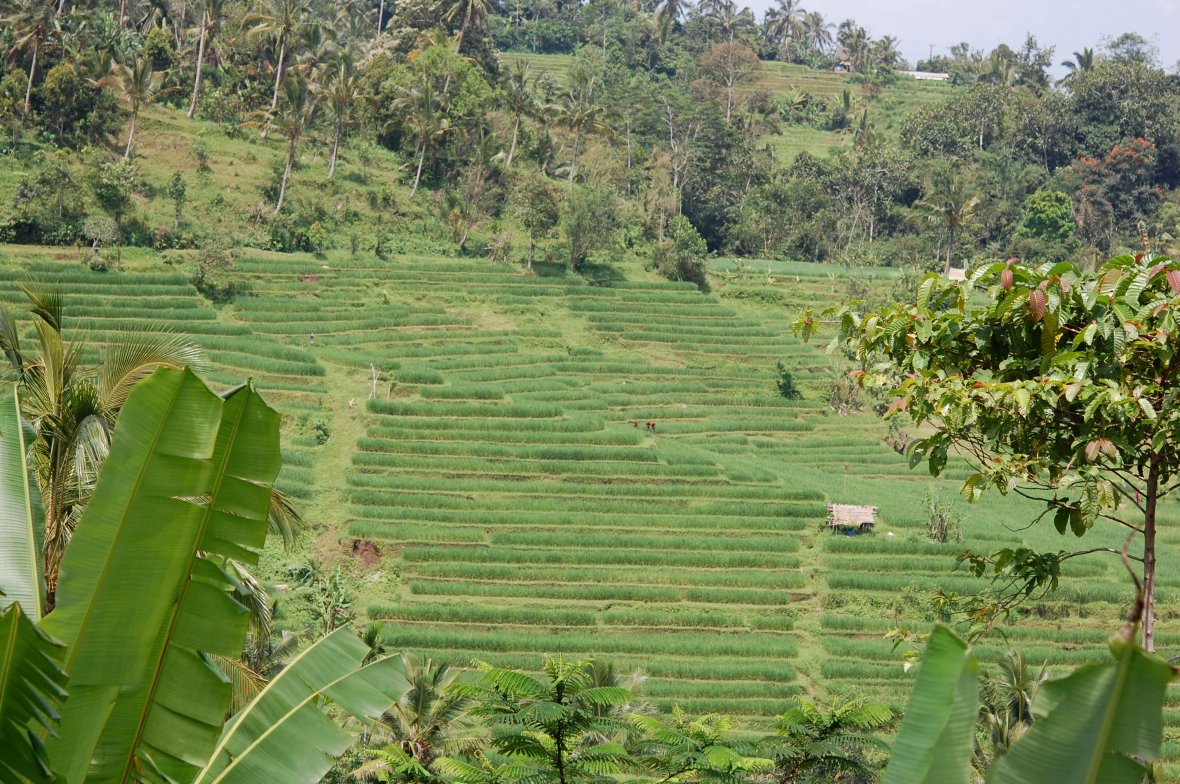 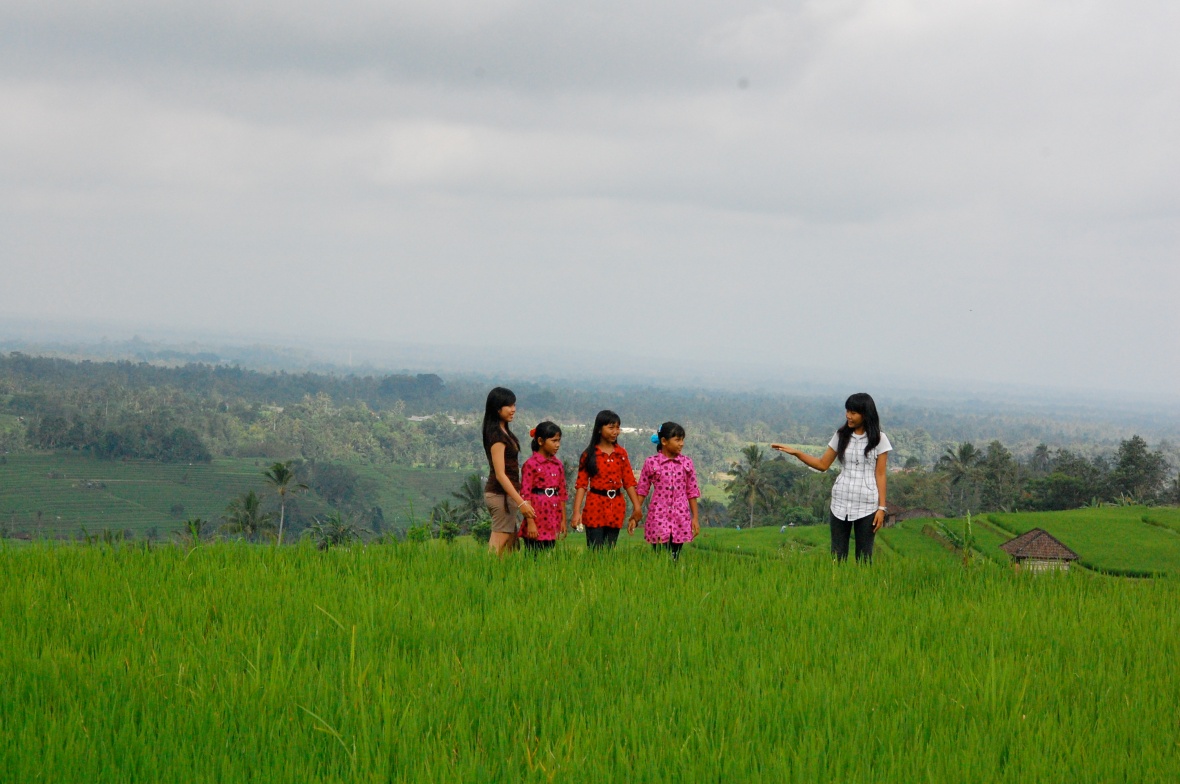 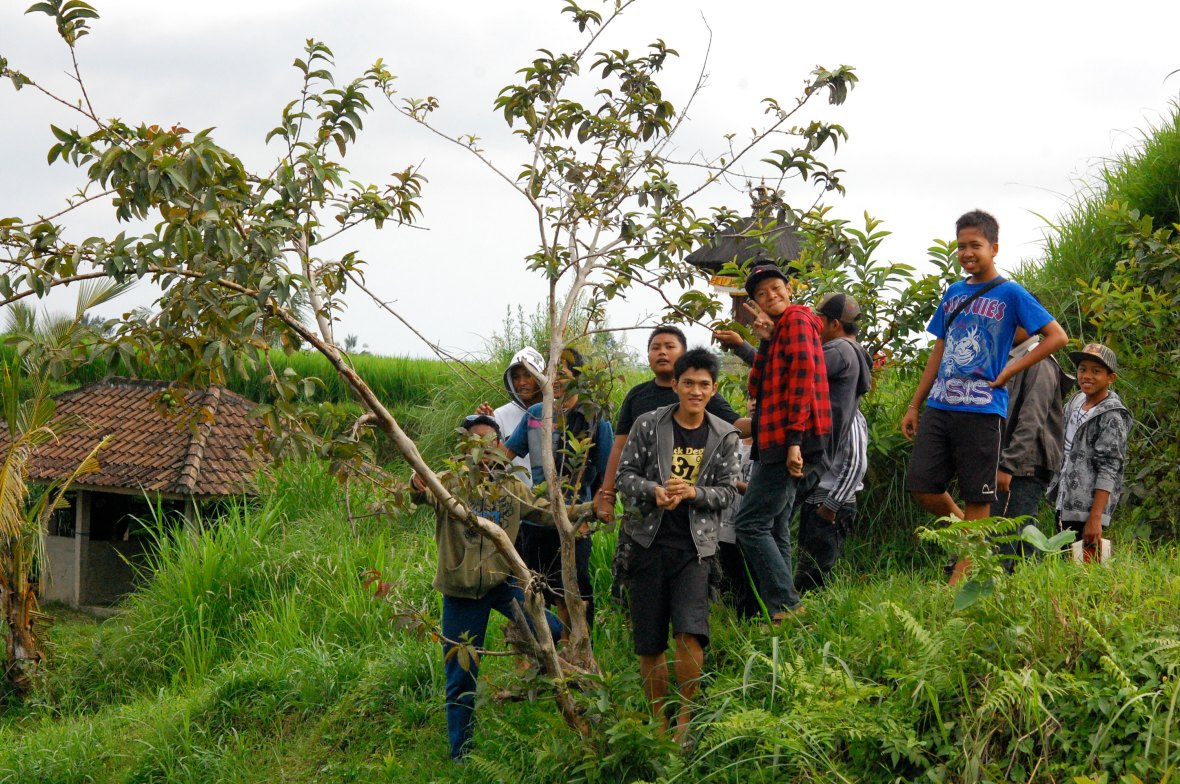 On the second day of Ganugan we decide to take a tour that includes visiting terraced rice fields,  agricultural areas, and a visit to famous temple on the beach at sunset.    The village that has the most spectacular views of rice terraces is called Jataluwi, which in Balinese means truly marvelous.    It doesn’t disappoint.   The first day of Ganungan is mostly about going to temples for ceremonies and offerings,  but the second day is about having picnics and hanging out together.   The countryside is filled not only beautiful scenery, but with large groups of really joyous young people hanging out together.  You cannot help but be infected by their energy.    In a world that has become increasingly protective and violent this is truly a breath of fresh air. 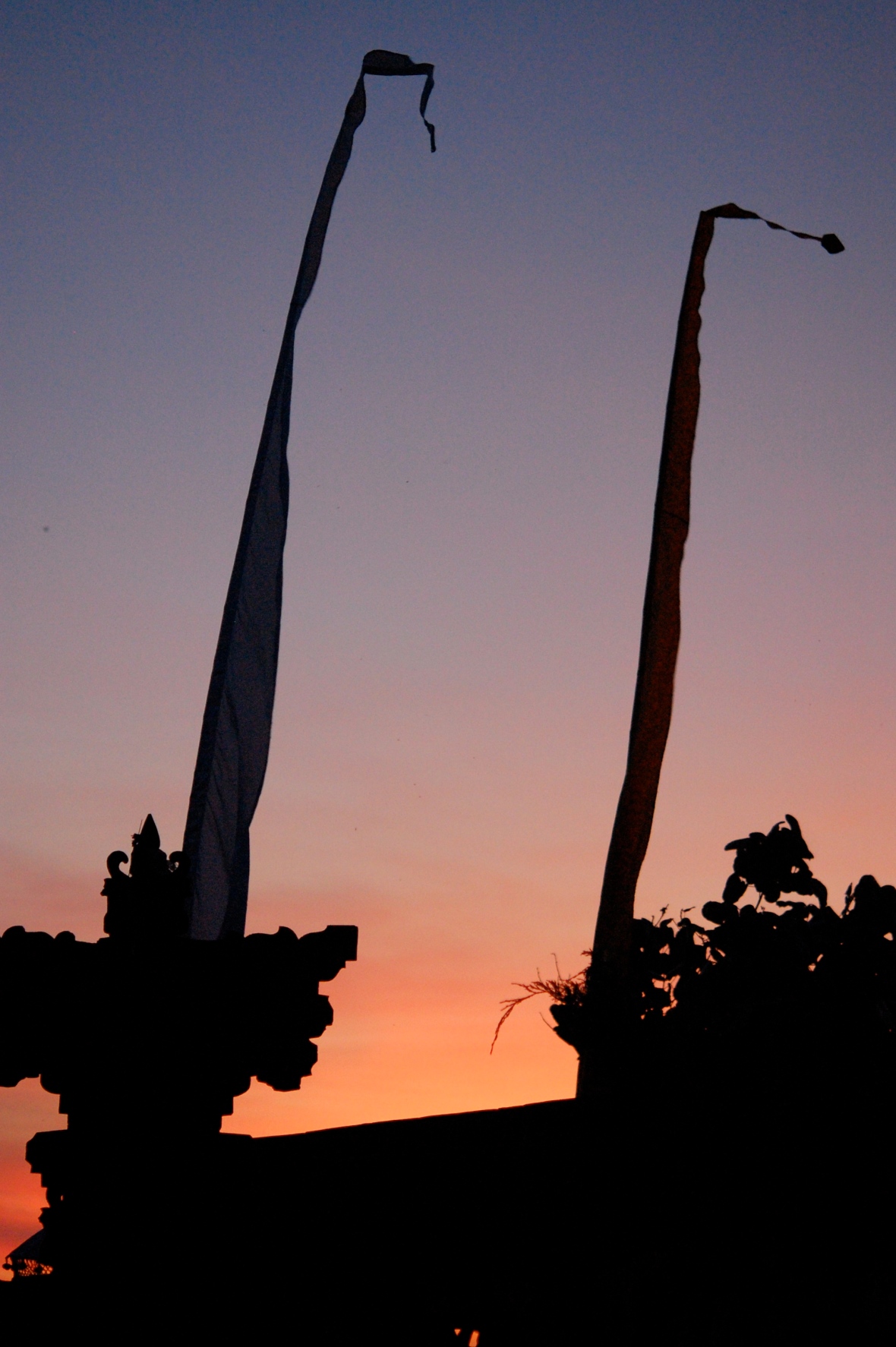 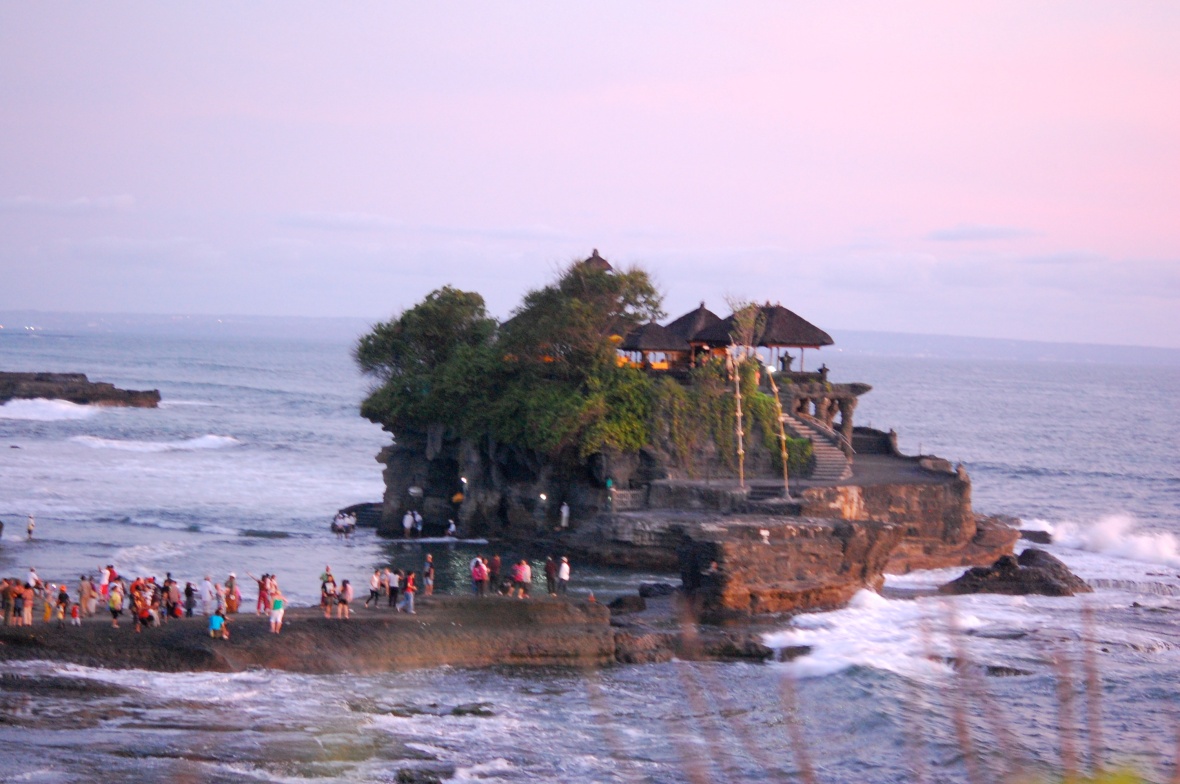 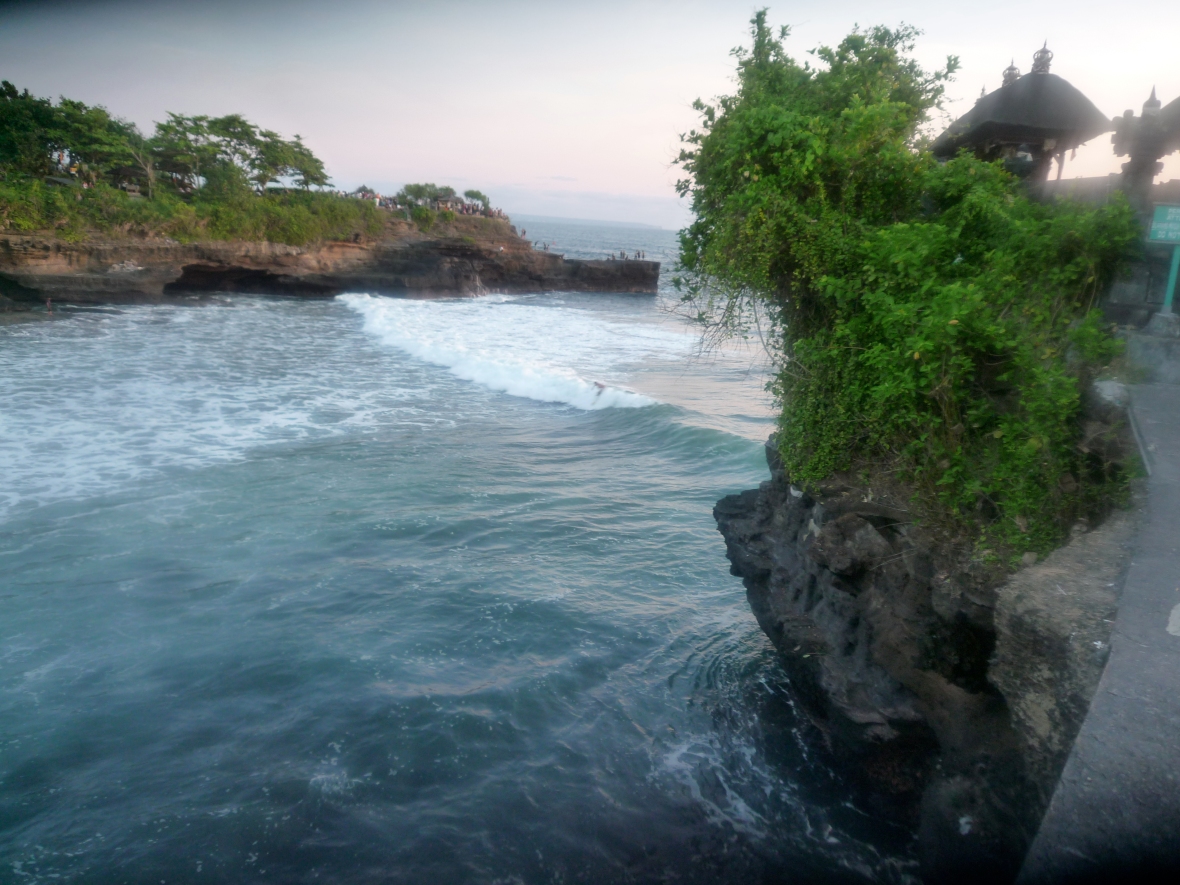 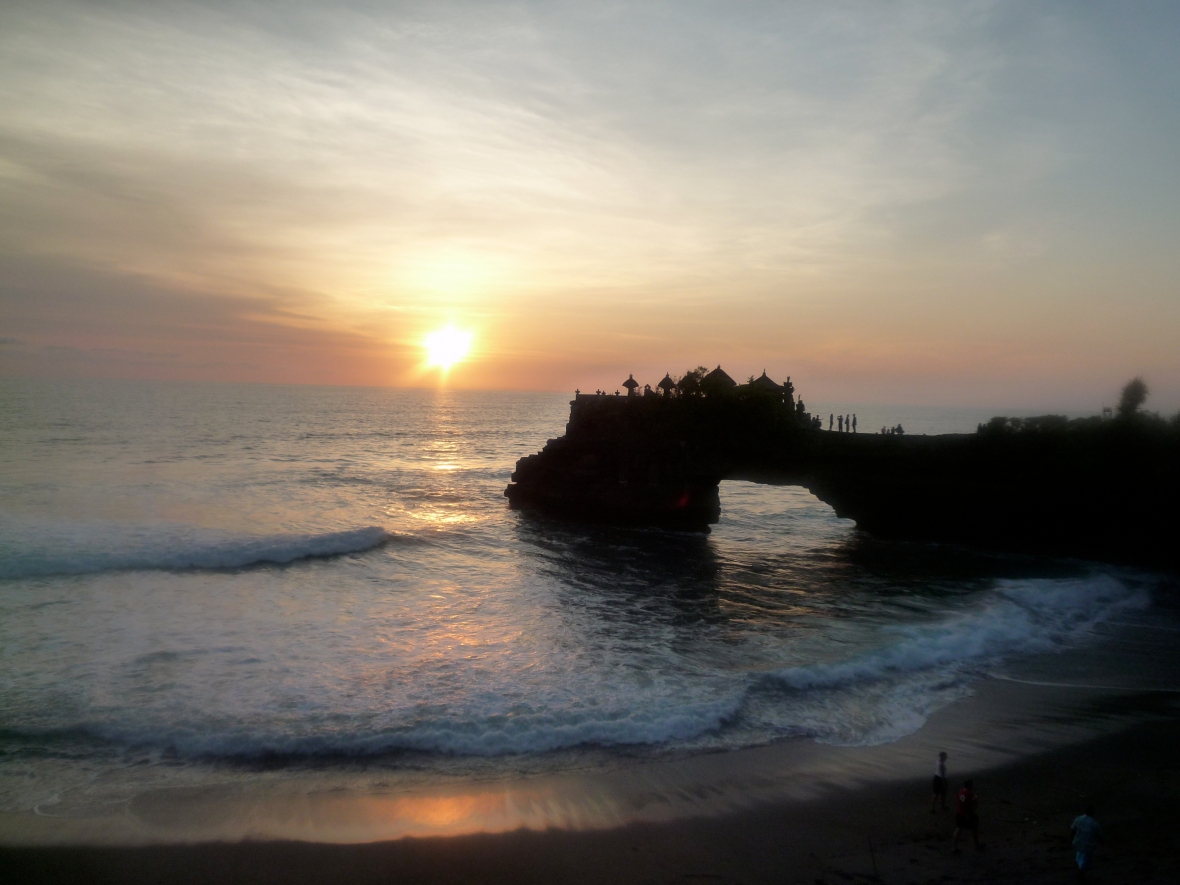 So what is it about Bali and their religion?    One on the unique things about the Balinese people is that every house and every business and every building has a shrine in it and twice each day someone makes little offerings and places them in the shrines.   Much of the battles of the Balinese religion, whose figures are Hindu in origin,  is about the process of good against evil, not unlike every other religion.   There is a black and white checkered cloth in every shrine that lets you know that evil is ever present so the battle with it is never ending. 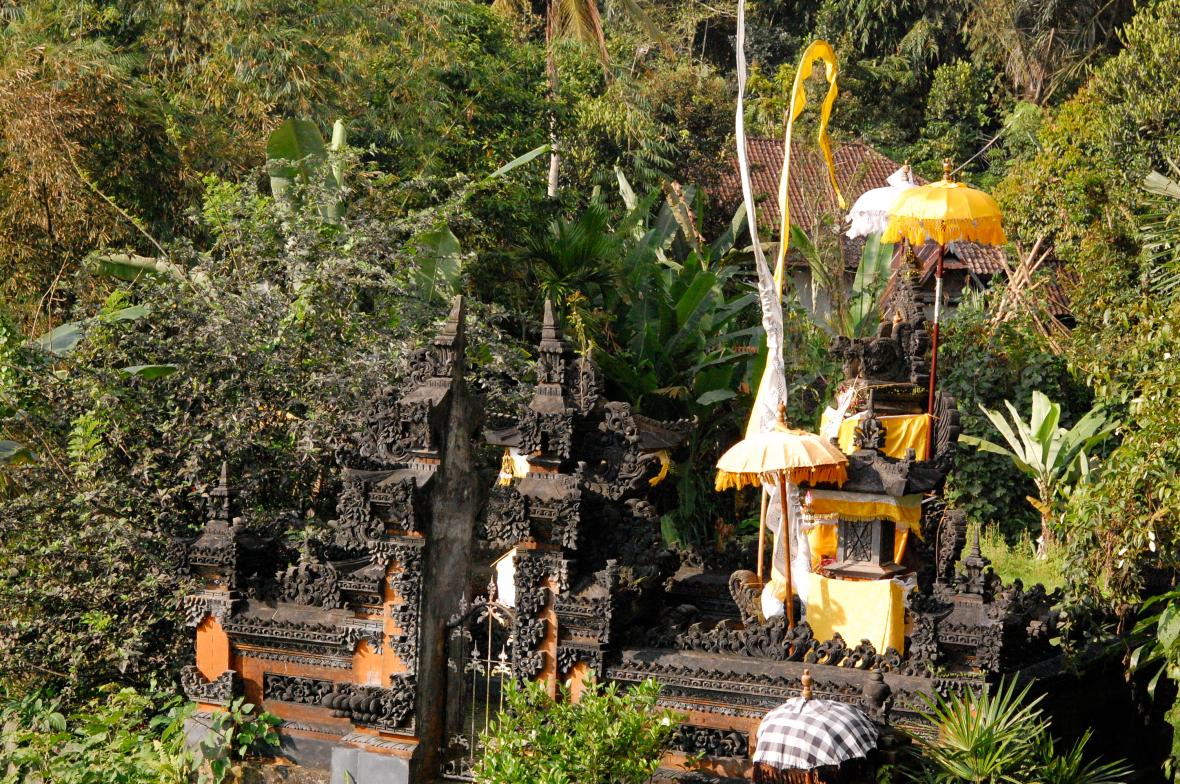 As we are leaving Jataluwi, we ask our guide, Tika, to explain the Balinese religion.  He says that there are 5 pillars.

Belief in God –    Balinese believe that there is one all inclusive God,  but the manifestations of His powers are divided into various personifications sort of like the trinity in Christianity.

Reincarnation-  Balinese believe that you are reincarnated from your past ancestors like great grandparents.  You don’t take different forms like being reincarnated as an animal and once you reach a certain level, you transcend the process of reincarnation to being permanently in a spiritual state such as in heaven.

Kharma-  Kharma is the idea that whatever you do has its effects in the world.  In simplistic terms what goes around comes around meaning that if you give out negative energy, it will come back to affect you in negative ways, likewise with the positive.

Soul-  We are essentially spiritual beings having a physical experience.

Salvation-   One receives salvation through doing good deeds and bettering oneself. 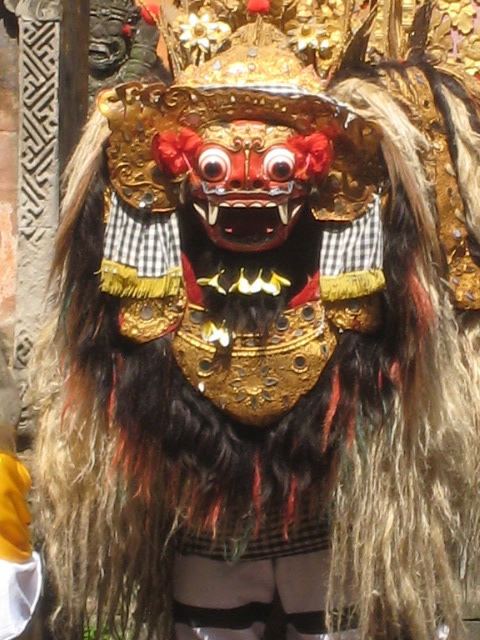 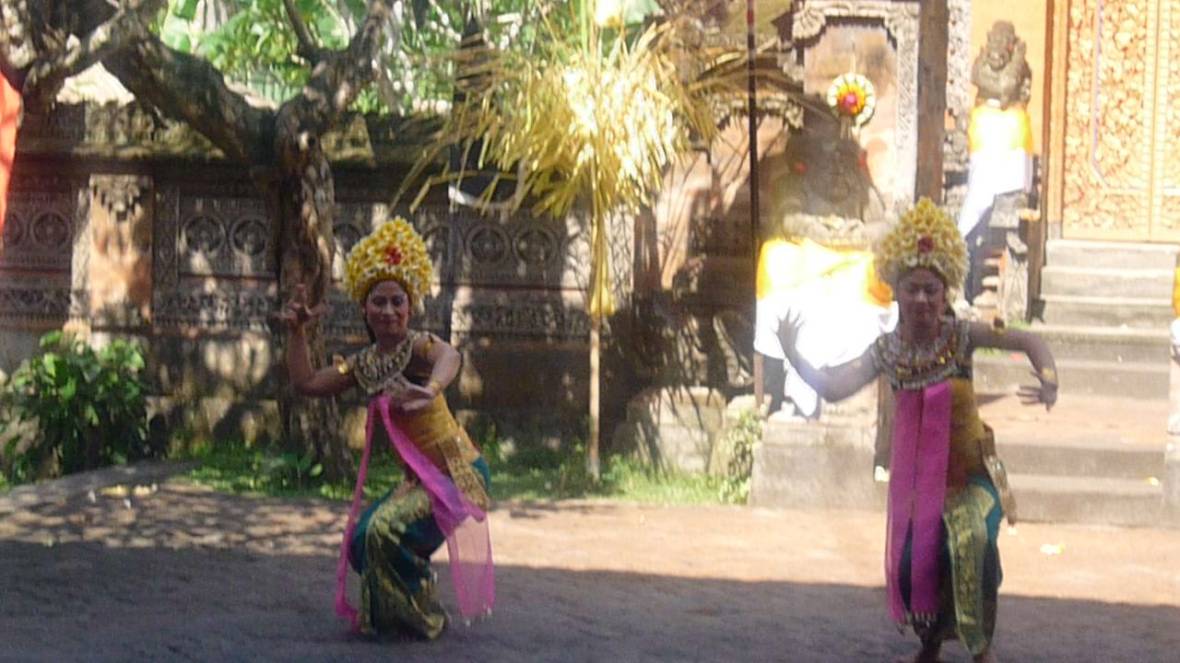 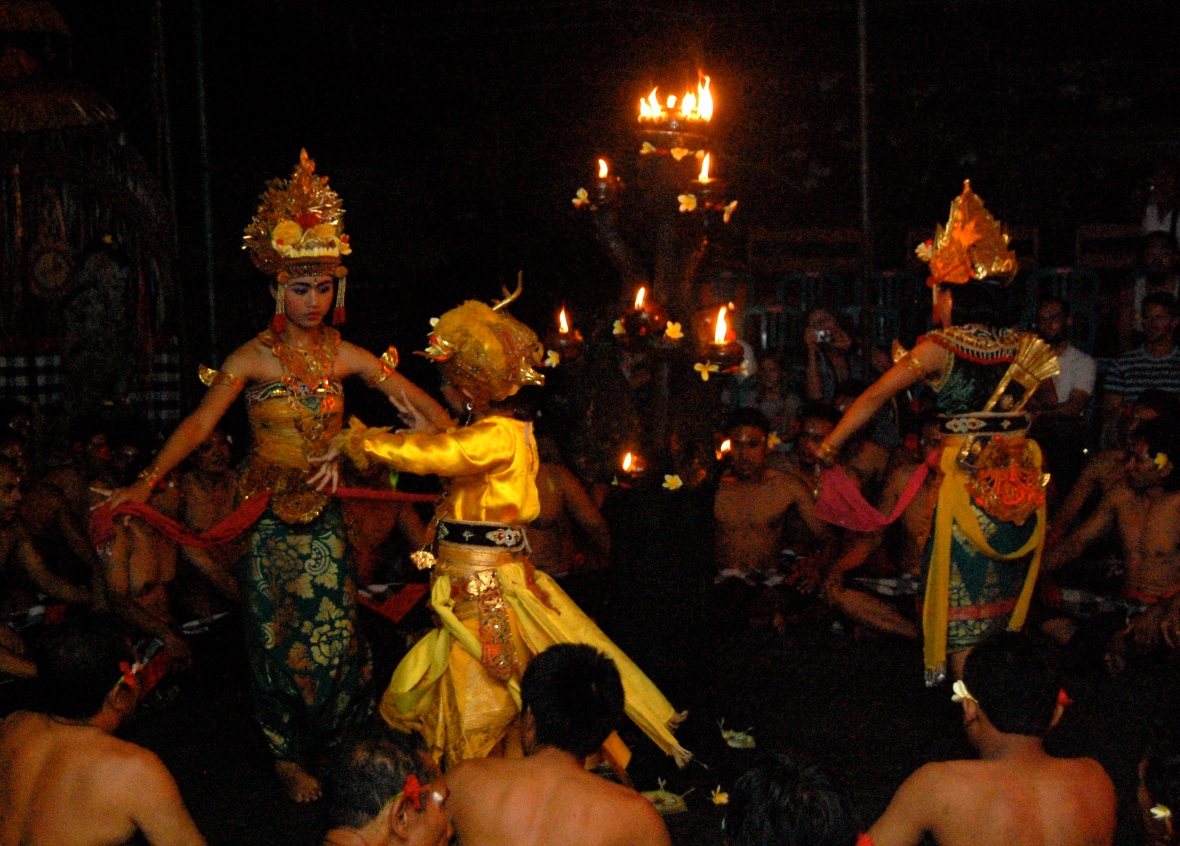 The cultural shows that we go to in and around Ubud including the Lion Barong and the Kecak dances really play out the battles one faces in  life in the process of dealing with the negative forces around us, trying to transform us into better human beings.    There are a lot of similarities between the Balinese ceremonies and our experiences in ceremonies with Native Americans.     It seems to me that it is easy to enter into a judgmental mindset about which religion is right and who is going to the underworld, and much more difficult to accept the universal process that human beings are involved in to make ourselves better.   If I allow my mind to think of religious experience in literal terms,  then I sink into dividing the world between us and them.    The mind does the us and them thing really easily especially when it is fearful so I find that I have to work harder at seeing the similarities in belief.   What makes it easier is looking at the way people behave toward one another. 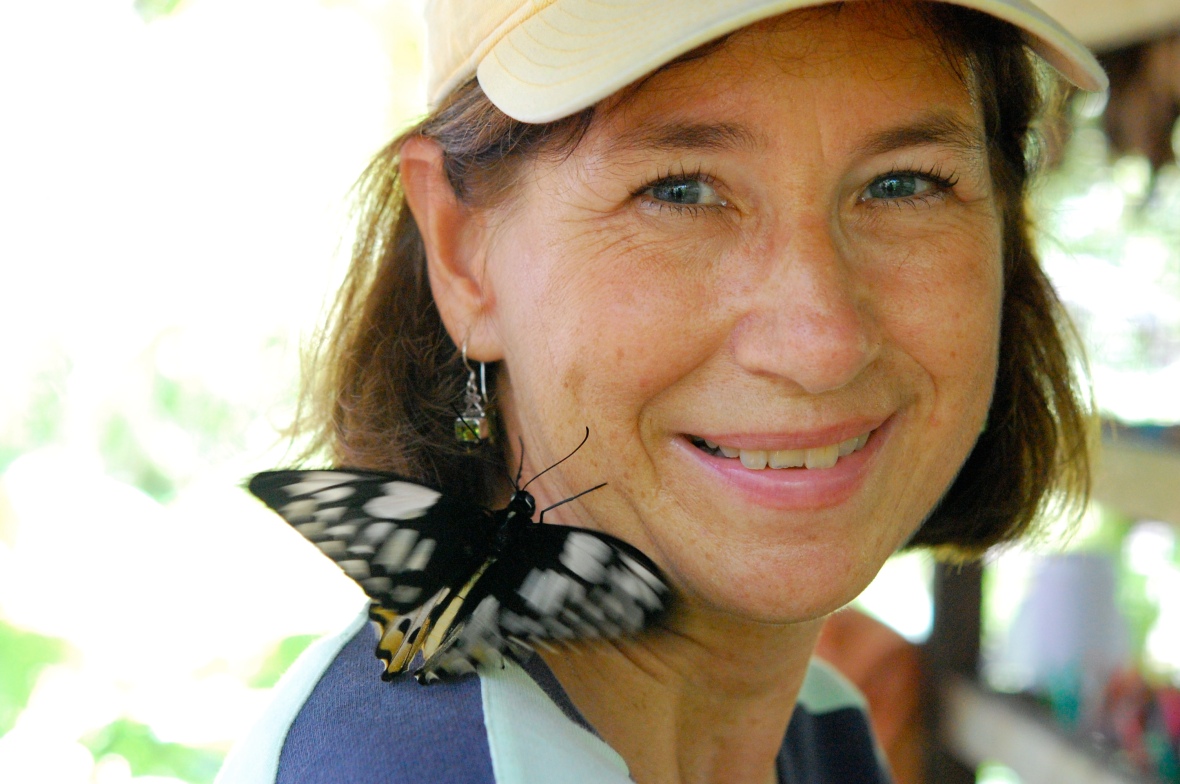 Everywhere we go in Bali people are joyous and friendly.  Even the butterflies are friendly.  There is a lot of good kharma and the surf is not too bad either. 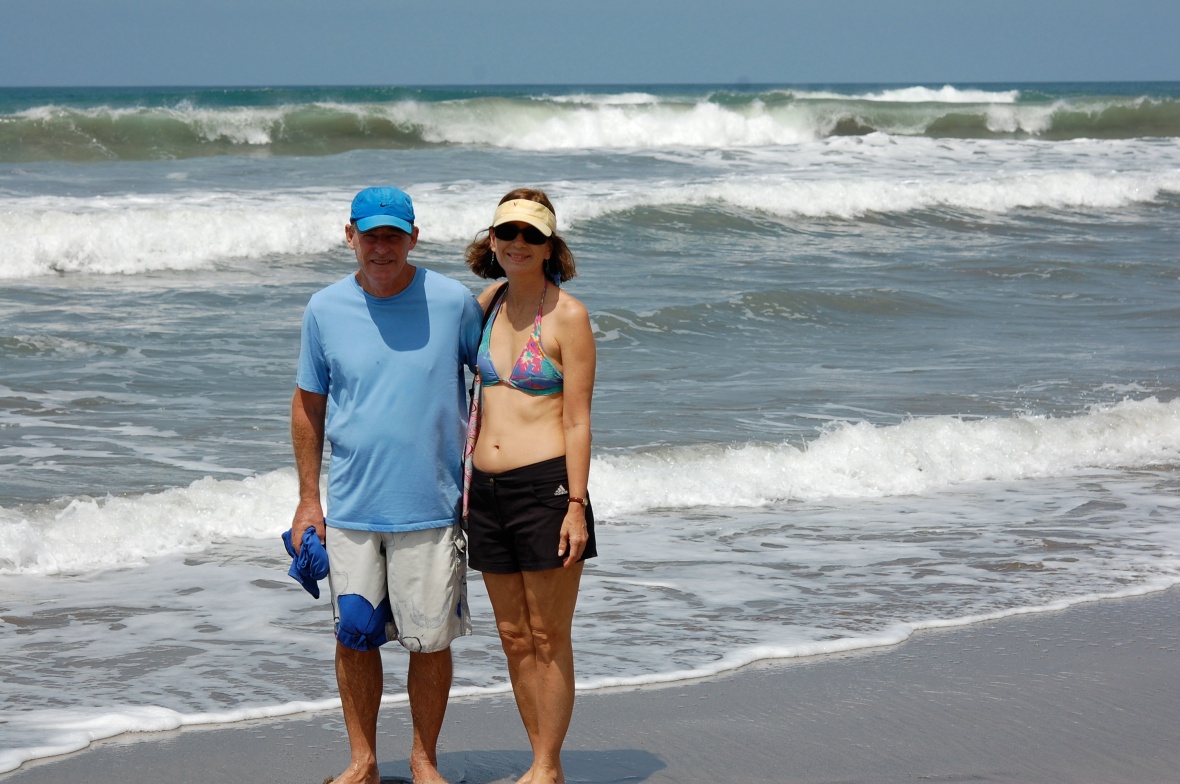 ← Intro to Daily Change
The Virtue of Camouflage →

1 Comments on “Searching for the Balinese Religion”