What can you say about Norway other than it is one spectacular scene after another.  Whether you are on land or sea you are surrounded by Mother Nature at her best.  She never disappoints you.   Our train ride from Stavanger to Arendal is peaceful and picturesque, but the great treasure for us in Arendal is to reunite with a our great friends Liv and Michael who we have not seen since they came to Brazil in 2002.   When you are with great friends, the time passed does not seem to matter, but the precious time you have together is sustaining.

Arendal is situated on the opposite coast from Bergen and Stavanger is very tranquil and gives you an idea of how Norwegian cities appear. 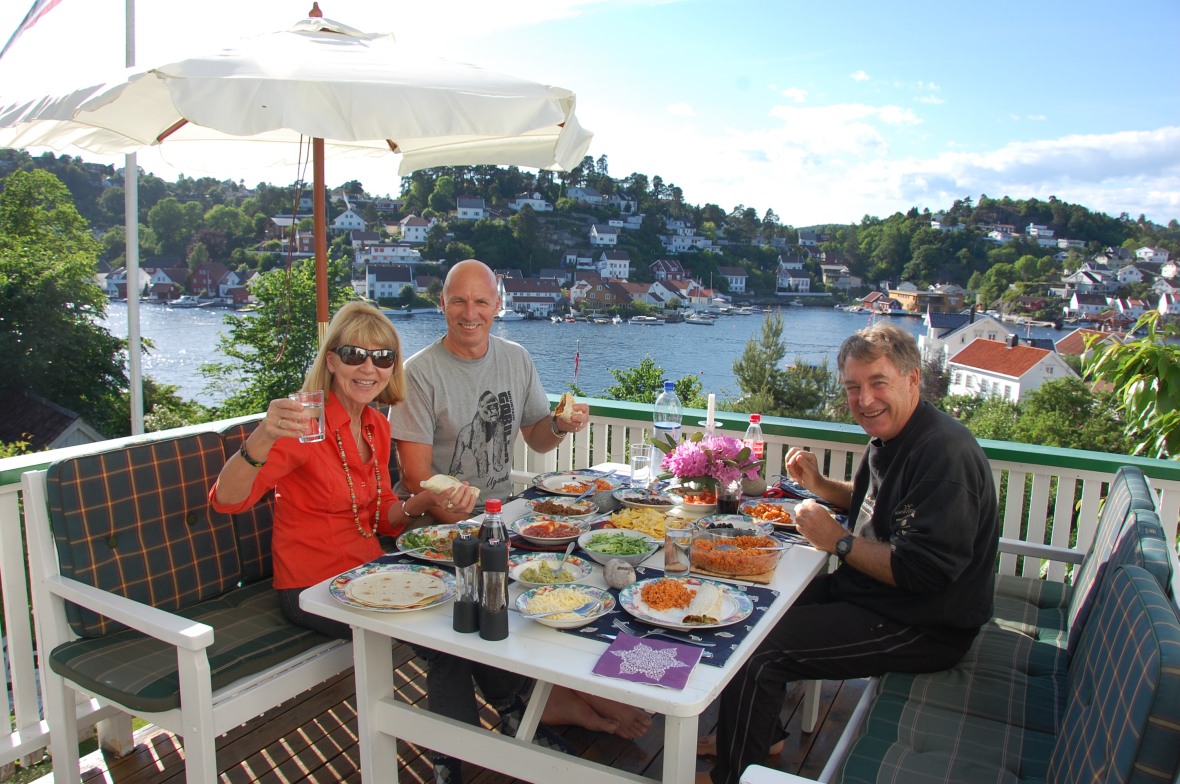 The next day Debby and I are on our way to Bo, a small town in Telemark, where Debby is on the second leg of a journey to help the family reunite with its lost culture.  In 2000 we were in the same shop as below buying all of the patterns and materials for her to make her Bunad.   A bunad is a traditional Norwegian outfit.   Each region in Norway has its own unique style which distinguish themselves from each other.  Here is ours.

This woman is going to help sew the outfit together.  She could be right out of any small town in Minnesota.

The same day we made our way north to visit a stave church.  These are uniquely Norwegian because they are made entirely from Norwegian wood.   This one is quite old, but most of it has been rebuilt.  The outside images were used to keep away the bad spirits.   Think I will put up a few around our condo. 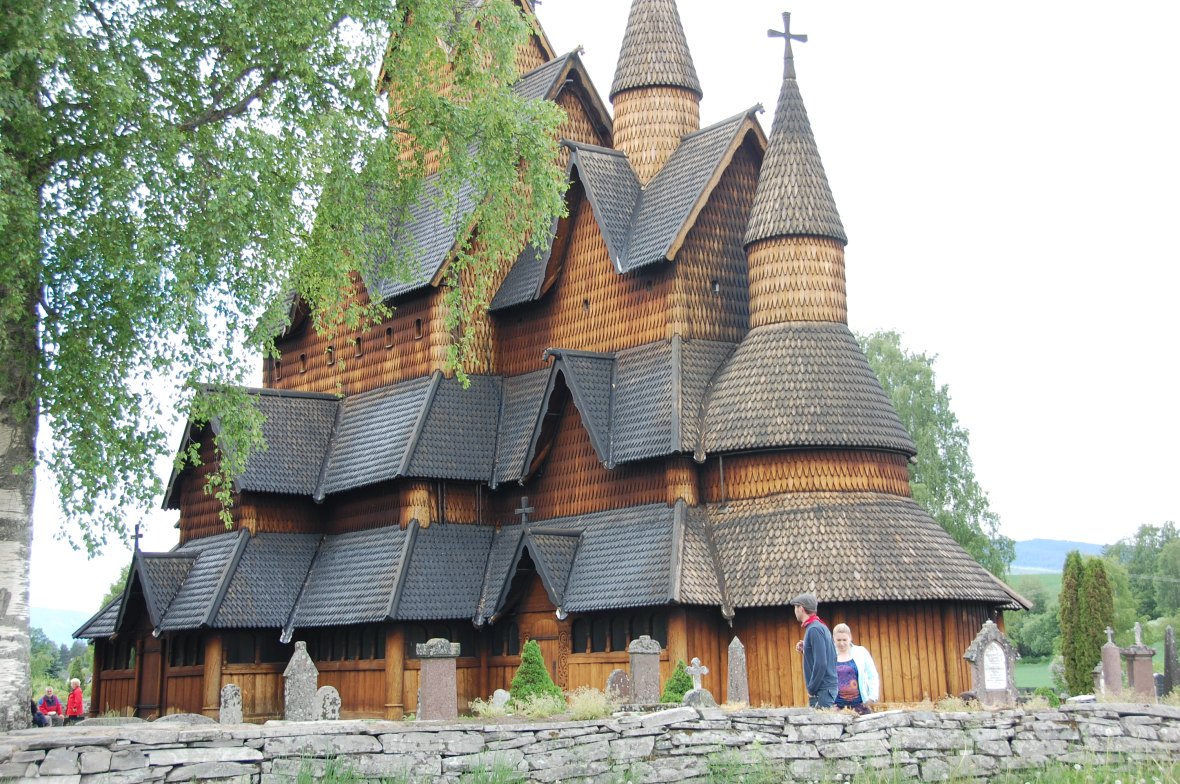 The next few days we are once again in Telemark on a remote lake, the name of which escapes us.  We are on the only ones on the lake in a hoogli (cozy) cabin.   After arriving we climb the nearest bluff.

Michael loves to live out the expression “boys with toys” because the next morning he finds a chain saw and decides to cut down a couple of trees for firewood for the next visitors.   The result of his play is that we  carry 30-40 kg logs down a hill some 100 meters.  Thanks for the service Michael. Afterwards we take another hike that lasted about 4 hours. 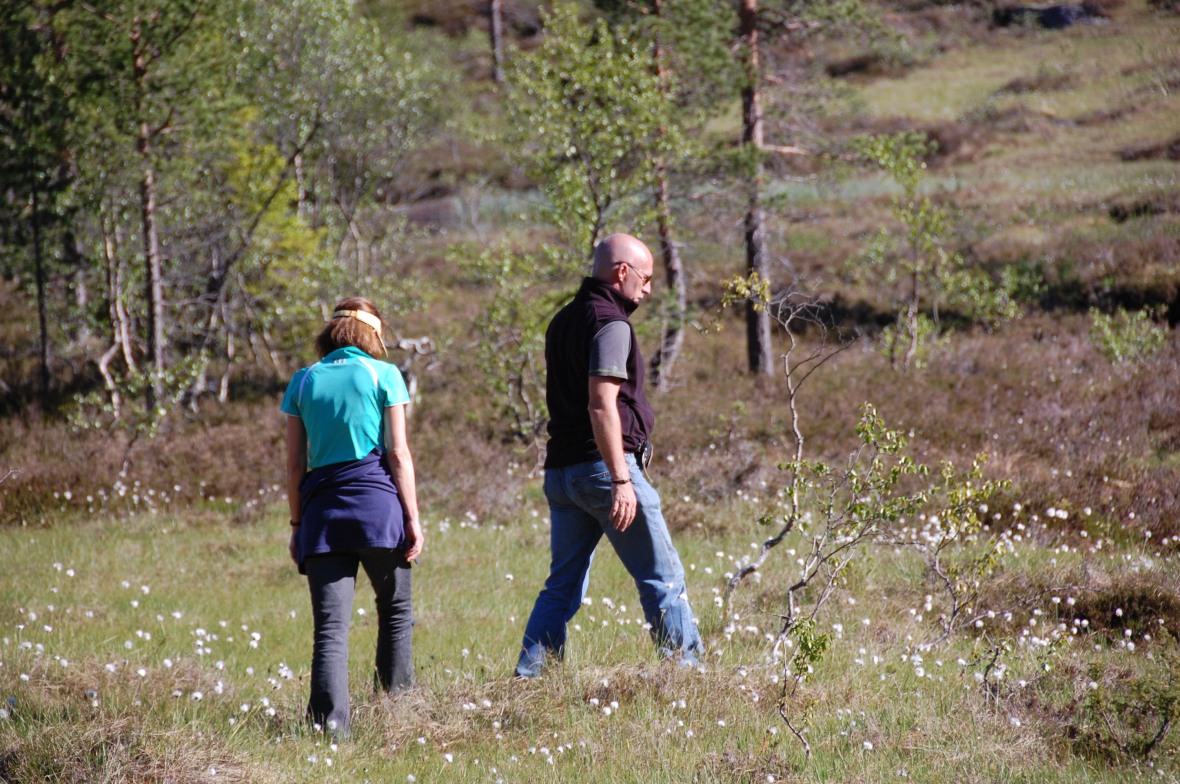 Later that day Debby finds some great reindeer boots.  Only in Norway!

The next day we say good-bye to beauty of this wonder place and head for another. 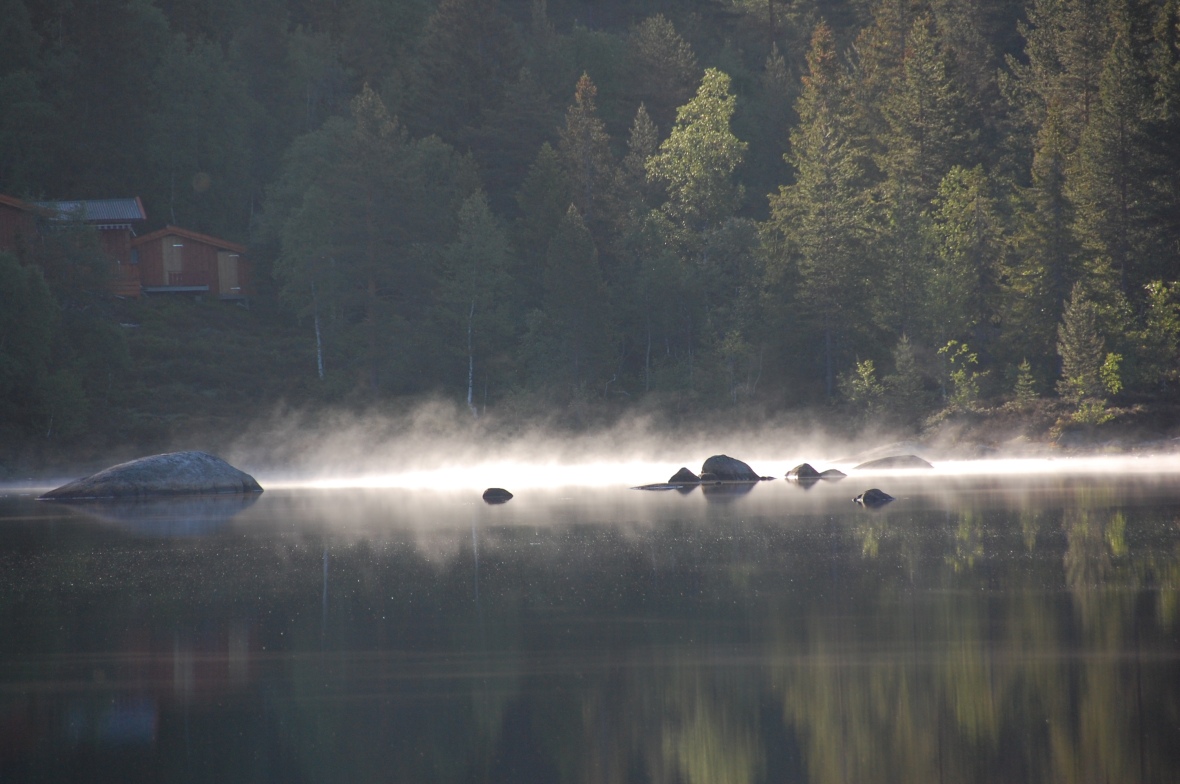 Vradal is Debby’s ancestoral home.  It is located in one of the most beautiful spots in Norway with a huge lake surrounded by mountains.   Almost every farm is Norway is small, and because it was such a poor country in the mid 1800s 700,000 Norwegians went to America mostly around Minnesota and North Dakota.   Many of Debby’s ancestors were stone cutters who helped build the Telemark Canal.  There work is extremely precise and their reputation was well known.   One person told us that the Sandens were quite bright because a lot of them ended up as doctors and lawyers in America while another said that they were known as squareheads, because they were good with their hands, but didn’t have a lot of brains.  You can take your pick.   This is where many of them have laid their bones.

It is quite an emotional experience to make a connection with your past.  The generation that left had almost no contact with the generation who stayed behind.  There was something just so unifying about returning as if we are retying a thread that was severed.   We are very grateful for the time taken.

So after returning from Vradal to Arendal, the next day we are up early to take the ferry to Denmark from Kristianland to Hirshalds and then a 5 hour plus train ride to Copenhagen.  There is something so peaceful and calming about trains.   You see the countryside, can get up and walk around, sleep, write, sew, whatever.   Riding the rails in Denmark is like going from the Rockies to the Prairies only instead of driving you take a boat.   Denmark is farmland and lots of new windmills.

When we arrive at the train station in Copenhagen, it is about 10:00 pm.  We are met by Tamilla, who stayed with us a year in 1988 when we were living in Alberta.   Tamilla is still very dear to us and now she has a beautiful family.

For me Denmark is a unique blend of the very old with the very new.   The architecture is fully of beautiful older structures including all of the shopping areas mixed with very new styles.   The remodeled part of the castle is full of paintings that are very modern right on the walls.   It is an interesting place and very worth the visit. 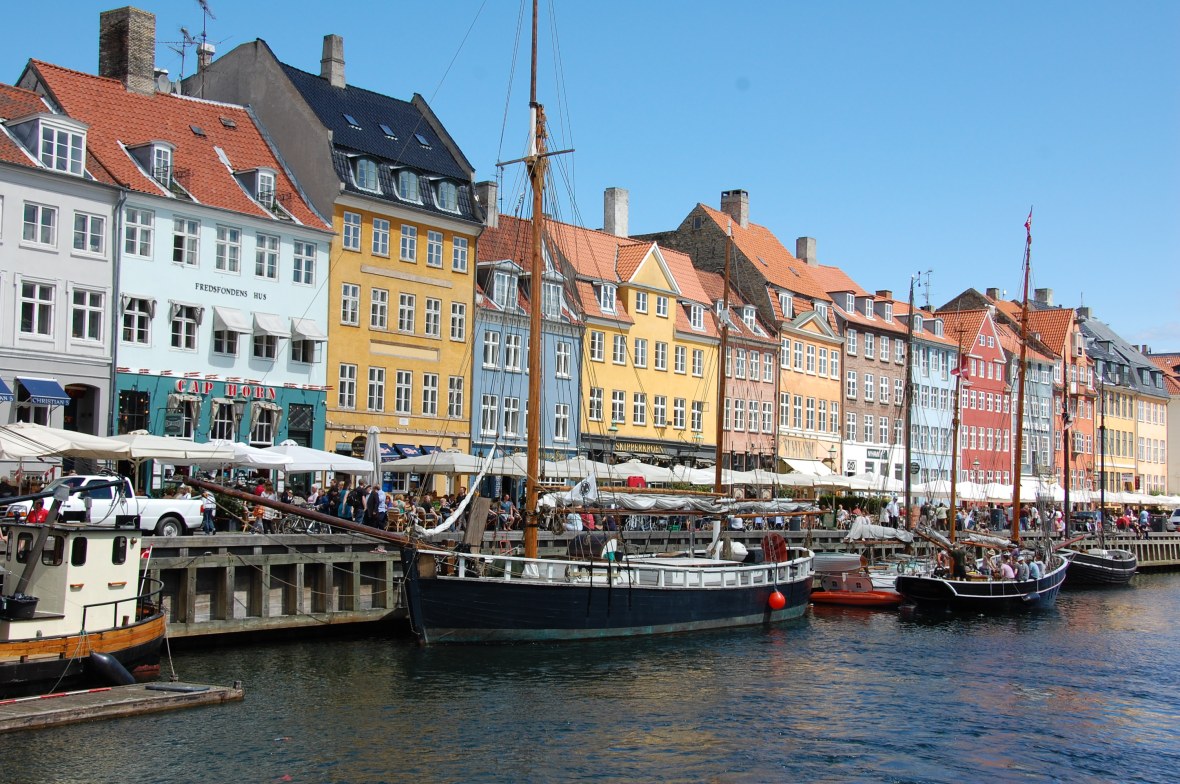 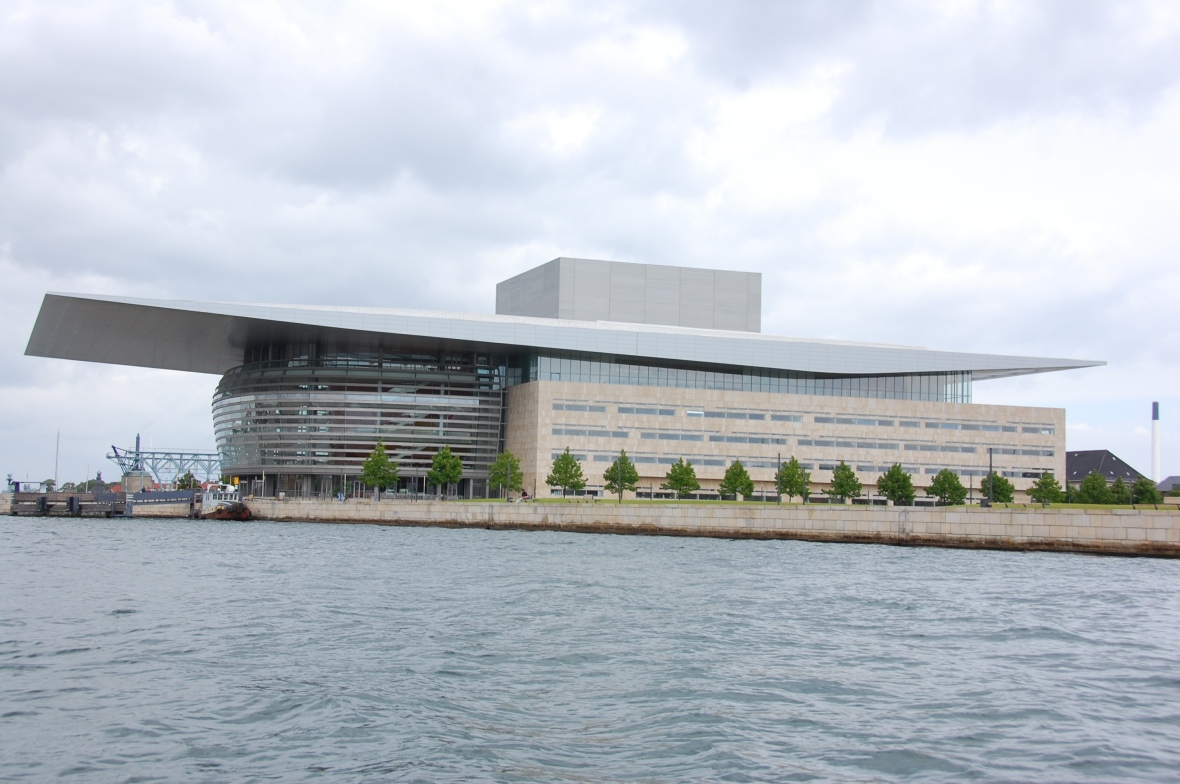 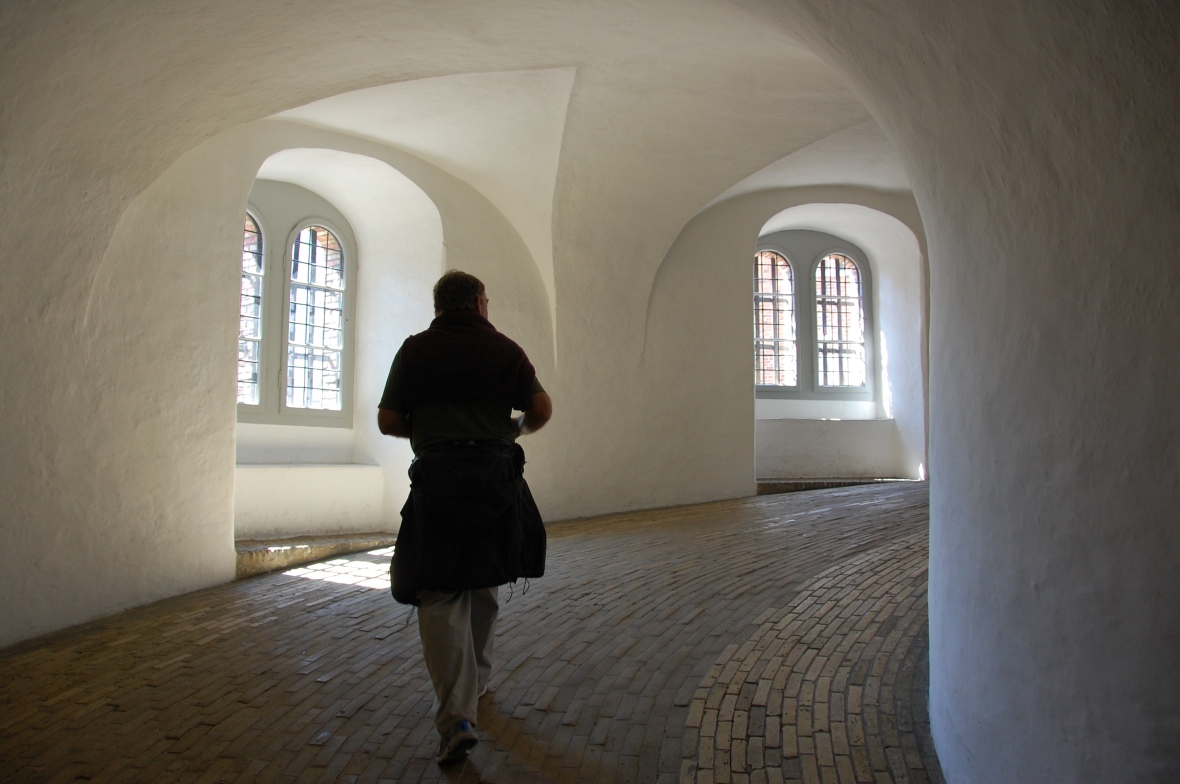 Lousiana Museum of Modern Art.   We see an exhibit of Andy Warhol meets Edvard Munch the famous Norwegian painter.  It expresses the same idea.   I think a lot about how Munch was trying to break through the oppressive aspects of the Scandanavian culture of the 19th century which seems to be work left undone in many ways.

This is for you Mom to see what we ate.

Here is Debby with Giamocetti’s sculpture.

This guy forgot to put on his pants.

I will leave you to your own thoughts. 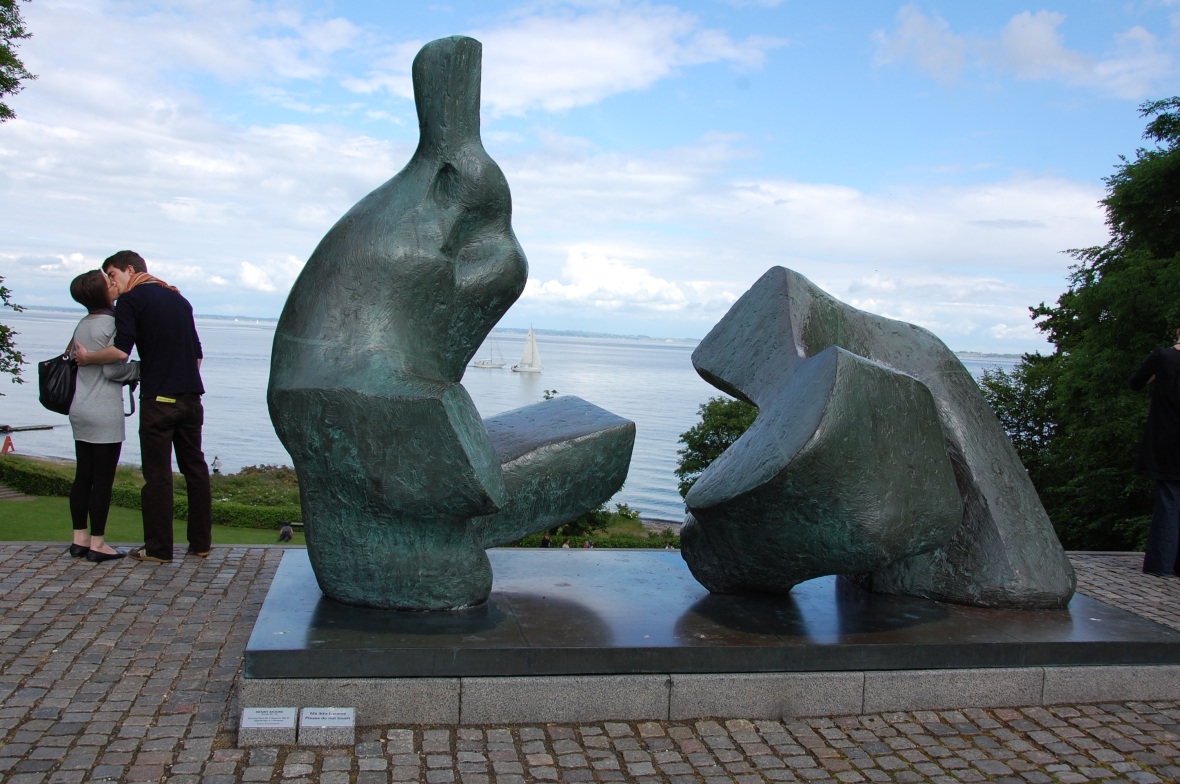 And now we are back in Hirshalds at a hostel spending the night before we take the ferry back to Norway. 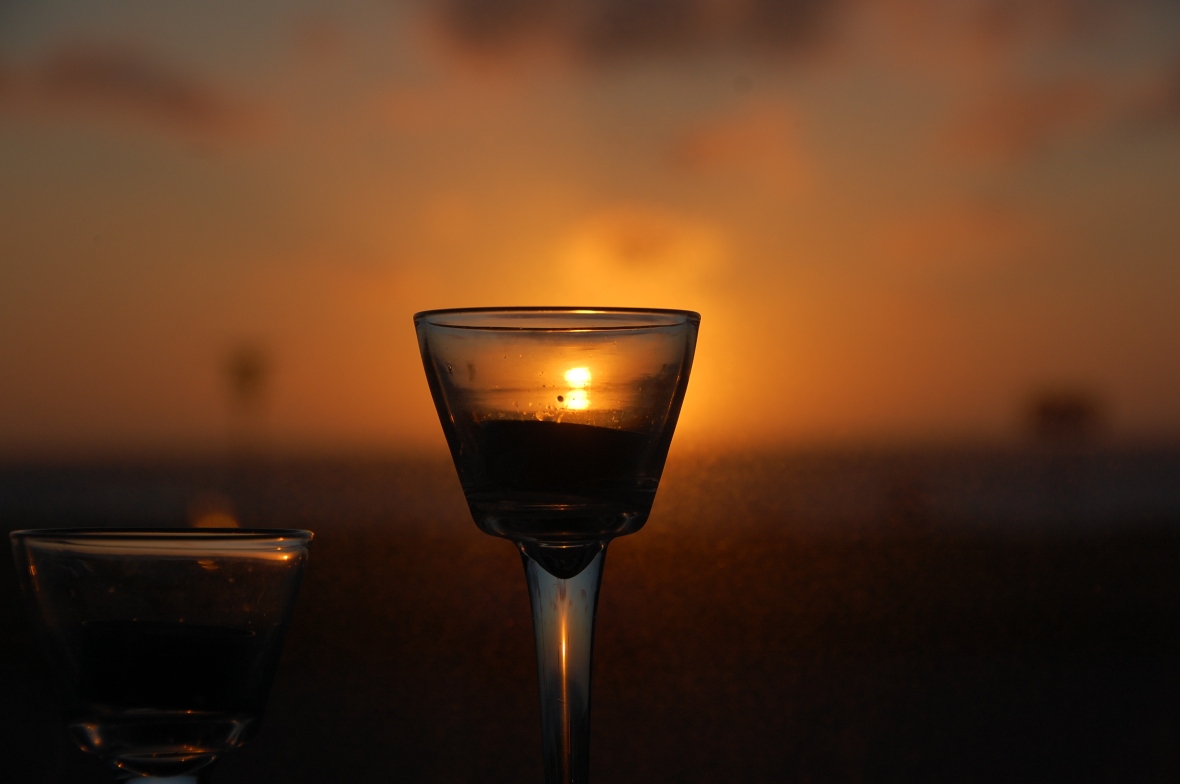 Good night. I am really tired.