Posted on September 15, 2007 by dreamsforpeace

How to Transform Your Child’s Nightmares into Amazing Capacities

It is not surprising to me that after I wrote my last post about Godzilla and the principle of opposition that, without having read the post, someone sent me an account of their 3 year old child’s nightmare with a dinosaur. The dream is as follows.

“I dreamed that a dinosaur was chasing me – it was big with blue skin that was really bumpy. And was scared, so I went into Mummy’s room, and I could see Mummy sleeping under the covers, but when I pulled the covers back, Mummy was a pirate! And she had a knife! I was so scared that I ran away from her, but he started chasing me so I jumped out the window. Mummy the pirate followed, and then killed her. “

This is what I wrote back to the mother with her permission.

“A dinosaur represents a huge fear of negative evil, reptilian, which means that it doesn’t have a lot of positive ambition and it is very old like dinosaurs. When you have a dinosaur in your dream, it means that you have huge potential and drive to go for really big things that that are positive. Think of it as a negative sign whose solution is really positive potential.”

“As a parent you can to do 2 things that will really make facilitate the development of your child. First is to acknowledge the fear and give your child lots of comfort and assurance. ‘That was so scary. etc.. ‘, but in your mind at the same time you are beginning to think of what the solution is because reassurance is only short term and can only go so far. The solution, that she has a big bright wonderful future, is long term. So you can start planning for how she is going to have a big bright future by seeing the signs of it in her spirit and then providing the environments she needs to develop it. Both processes are important, but the second one is sooo much more difficult than the first. Many parents do not even do the first process of acknowledging the fear and the dinosaur. They do everything possible to deny the experience hoping that it won’t reoccur. This can mainly be attributed to the fact that most people do not understand that the principle of opposition. Once you understand that the negative has a positive opposite that can be brought out over time, then it is much easier to be empathetic and patient with the nightmare. Culturally speaking most people do not believe that their children have incredible potential because in the history of the world we have been mostly led by tyrannosaurus rex. T-rex doesn’t like people who may challenge his leadership.”

“When she sees you as a pirate that has a knife that kills, it is because she needs exactly the opposite from you and also eventually from herself. She needs someone as a mother who is life giving and nurturing and sees her gems and provides environments for the gems to come out and then also acknowledges the gems when they are inside and when they start coming out.”

“One more thing. The blue skin that was really bumpy means that she sees the dinosaur (the fear) with a lot of clarity. To solve the problem you can have her see who she is in a positive way very clearly as well so that she can begin to generate a positive future and become enthusiastic about going for things. The clarity is also an indicator that she has the ability to perceive the negative aspects of the culture very clearly. This means that if she is guided properly, she will readily be able recognize people who are dishonest, who are trying to take advantage of her, and are ambitious for their own greed.”

“Windows are symbols about vision because you start from inside of your true self and then look out into the world. Your house in a dream is a symbol of your self and so a window is the vision onto the world. What a child would normally do is look out a window, see possibilities of play or something like that, and then run down to do the activities, but in the dream she is so scared that she jumps right out of her vision.” 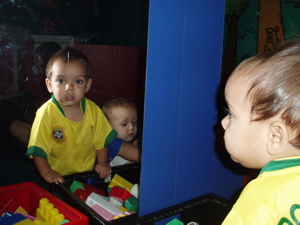 “Vision is an essential part of the development of a person’s will because they get an idea in their mind ( a window of opportunity) and then seek to achieve it. Fear of the dinosaur drives out the positive envisioning process.”

“What you can do to help her is to ask your own self the following question. What is the part of me that is acting out of the negative culture that is fearful of envisioning great possibilities?”
“Then you can begin to change that part into positive capabilities that will support her. The negative cultural aspect of yourself is the pirate in your/her unconscious that comes through the dream.”

“What I would guess is that there is something in your own envisioning process that has been affected by the culture.”

Last notes: My experience is that people dismiss their nightmares or just try to forget them because of not knowing about the opposition principle. When you have a nightmare, it is a sign that you have a great deal of fear and very little of the capability that the dream is calling forth. My personal practice with nightmares is take as much time off the day after so that I can begin the work on the new capability because it is like an infant at that point. By doing this process you can actually become excited about a nightmare because it means that you are going to develop something brand new. If you dismiss the nightmares in the dream world, then they have a tendency to appear in the actual world.