The Leaders We Are Looking For Are Inside Our Ownselves 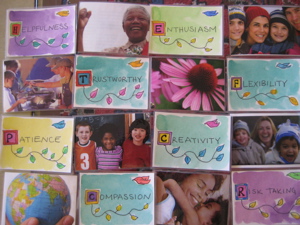 Last week during one of my physical education classes with my 5 year olds I witnessed and incredible act of leadership that left me with a great feeling of hope. I have a young boy in one class whose frustration tolerance on a scale from 1-10 is minus 6 or 7. He has had a melt down in each of first 5 or 6 classes, but during my last class something interesting happened. I had the students work in pairs throwing and catching balls back and forth. Now my frustration boy had had almost zero attention in other tasks, but on this day he was paired with someone who had almost no English which immediately thrust him into a helping position. He watched the task, decided he could do it, and started working with his partner. He acted extremely patient and encouraging with his partner, showing him what to do and being the perfect leader. I was shocked, but so pleased that I immediately wrote it down in my notes after class because it was the first really positive sign that he had ever shown.

I am not so sure what happened inside for him to make that kind of click, but it was clear to me that he had become a leader on that afternoon because he was practicing the virtue of helpfulness. It just made me realize that leadership is no longer a function that can be described as a top-down function. We seem to mostly make jokes about those who still are appointed to positions highest up on the hierarchical ladder because leadership can no longer be directed by one person, if it ever could. Those who try to force their wills by reason of position have found themselves isolated and unsupported. Their days are obviously numbered. The only people who are thriving are those that have turned decision making into a collective process and worked to empower members of an organization through capacity building and decentralization.

The world has turned upside down on its head because now the best leaders are not those who are decisive and willful, but those who support the development of leadership and decision making abilities in everyone in the organization. My 5-year-old melt down specialist became a leader in my class. How can I support him to be a leader all the time?

← Having a Bright Future When All Seems Lost
Further Notes on Leadership: Dealing with Frustration →