Posted on October 23, 2011 by dreamsforpeace

A Day in the Life of Myanmar (formerly known as Burma)

In my on-going education about the world I am learning a valuable lesson, a repeated one, this time in the land we call Myanmar.    When we read about a country from the outside in our daily journals,  we hear about the bad actions of governments, then mistakenly generalize those actions to everyone in the country and believe that it is a dangerous place.   We never felt in danger in Myanmar.  It is a special place

During our time in Bagan, which is an area that has 1000s of ancient temples built from about 1100-1300 AD,  we were anxious to get on top of one of the temples to see a more panoramic vision of the area.    We saw this group of university students studying architecture in Yangon, who, as part of there studies visit Bagan to measure and draw old temples so that the archeological museum in the country  has a record of them in case they are destroyed in a natural disaster or some other way.    I asked them if I could climb up with them where they were doing the work which they readily agreed to.   They were all very anxious to speak to us with what English they had and were extremely friendly, warm, and fun. 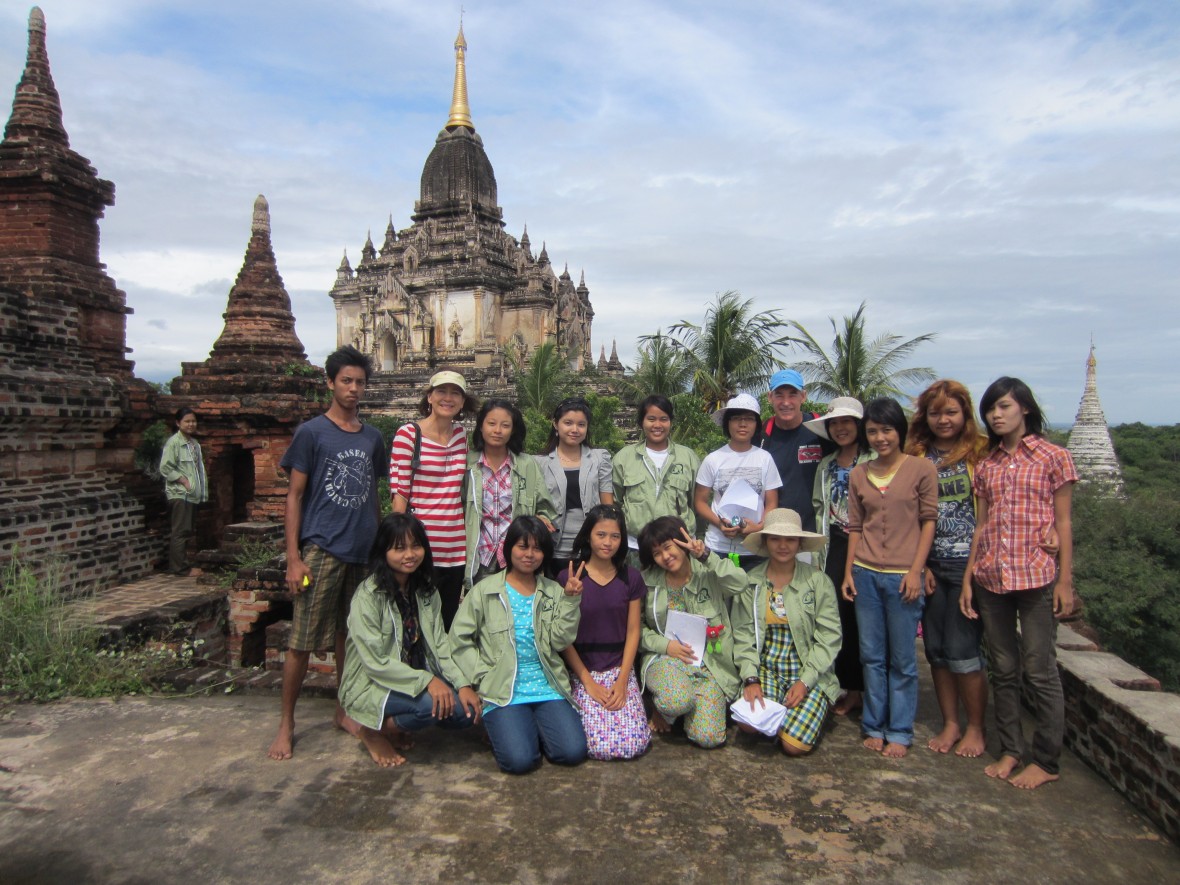 Myanmar is actually the country I had in my mind when we first were thinking about moving to SE Asia several years ago, because Buddhism is everywhere.   The type of Buddhism practiced in Myanmar places Buddha at the top in the way one worships followed by a number of spiritual energies called “nats”, which are equivalent to what Christians would call angels.  To me it is very similar to the Catholic Church.   The essence of the teachings are to develop a good character, to perform good deeds, to practice detachment and to meditate and pray.    The people seem to be permeated with a great deal of peacefulness, kindness, and sweetness.     When Debby and I were going to dinner one night at our hotel, one of the workers there said he would like to fix up the room, which at first we thought was somewhat unnecessary, but when we came back this is what he had done.   The bed was lined with a pattern of flowers.    I don’t think we have ever experienced sweetness expressed in that way.  It was quite magical.

Bagan has so many ancient temples that we even had one to ourselves in our hotel where we could go to meditate and pray.   It was explained to us that the way the Buddha is sitting with his hand and fingers touching the ground is a symbol to be grounded by not harming anyone or anything.

In our first day in Myanmar we are driving to a village on the Delta called Daidanaw.  In 2008 during the cyclone most of the village was destroyed.    Nearly all of the homes were flattened.   Today as we are entering it,  everything is rebuilt.    It is as testimony to resilience and the people’s strong character.      Daidanaw is affectionately known by Baha’is as Abdul Baha’s village.   In the late 19th century when the Baha’i Faith had only been practiced in a few countries a Persian by the name of Syed Mustapha Roumie traveled to Myanmar to teach others about Baha’u’llah.    This whole village along with a few surrounding areas became Baha’is.     Debby and I are there to speak to the Baha’i community.   They are so warm and friendly and welcoming and have heard that we do work with the virtues and that I can speak about dreams.    The nice thing for me about doing the dream work is that after having given so many presentations in various countries in the world,  it is easy enough to just get up and speak.   Debby and I first talk around the theme of developing good characters by developing virtues, and then one of the community members asked if I will talk about dreams.    I am shy to do it beforehand because I am not sure how people will react to the topic.   Since they have asked me,  I start the session.    Among other things the dreams they share are about not being fearful of things from outside of themselves,  that there is support from within.

Later when I speak about dreams in Yangon at the Baha’i Centre the themes are about going way beyond what you believe you can do,   having hopefulness and optimism about the future,  developing understanding and compassion,   and finding support from inside.    Several people in both places come up to me after the meeting to talk about dreams that they were reluctant to share in the group.    One is mother of a physically handicapped boy, who in her dream, she saw walking and running freely.  I explain to her that his spirit is very much in tact and whole, and then we talk for awhile on what to do educationally for him. 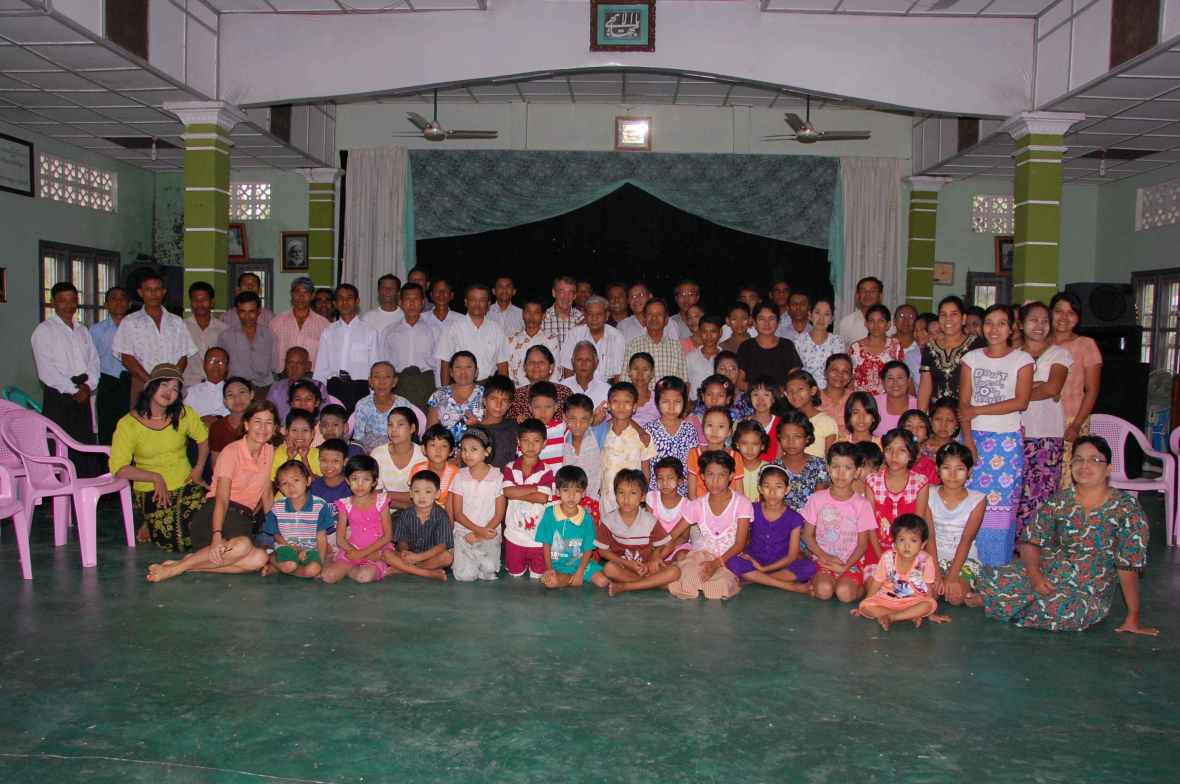 Women in Myanmar and some men wear a type of cream on their faces that comes from a tree back that protects from aging and also seems to be a sunblock.   It seems to be unique to this country.   Most of the women wear long skirts and so do about half the men. The nuns have pink robes while the monks are dark red.   They come to the market every morning where vendors make donations of food to them.    Some people in the market are just characters. 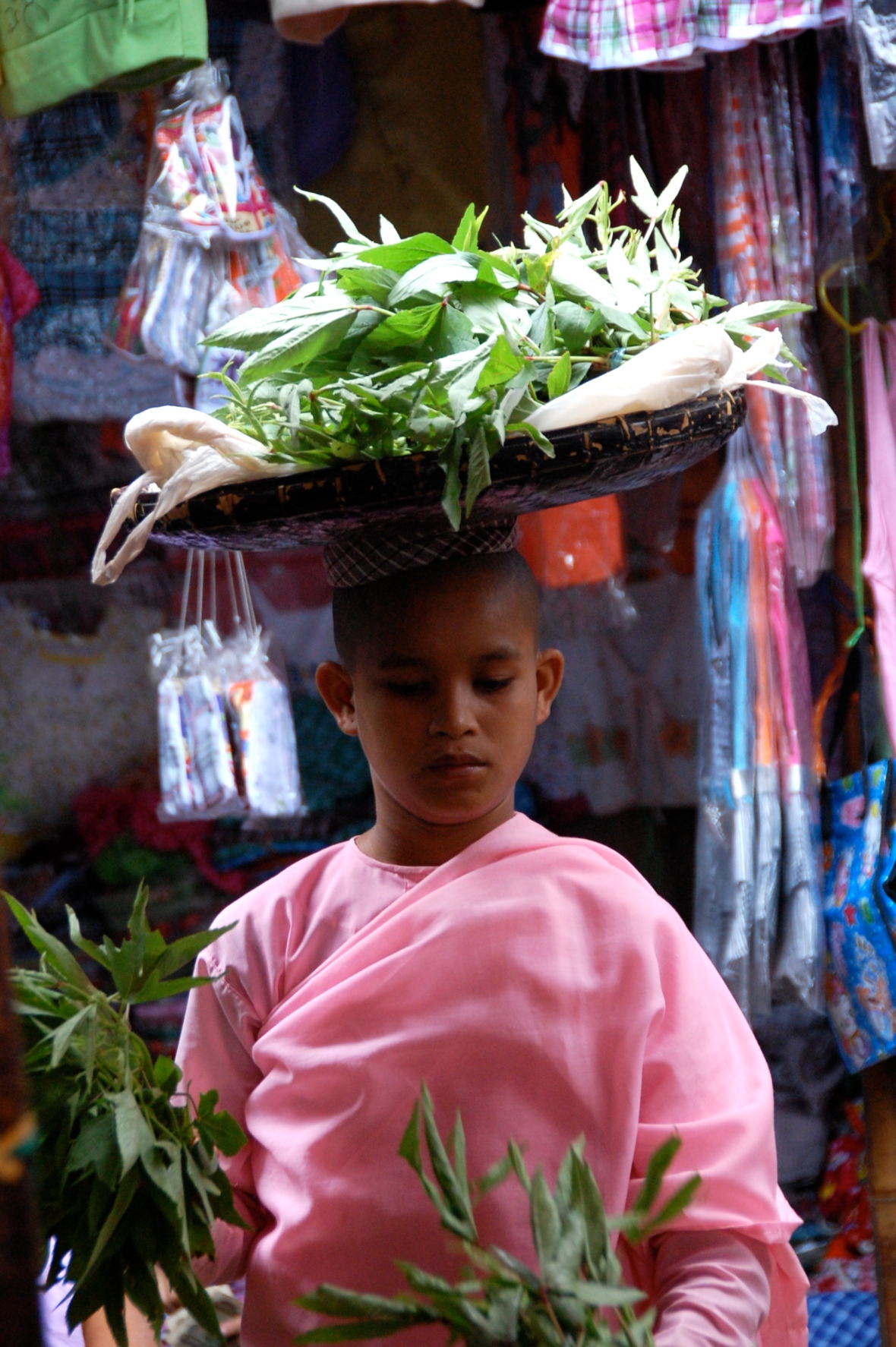 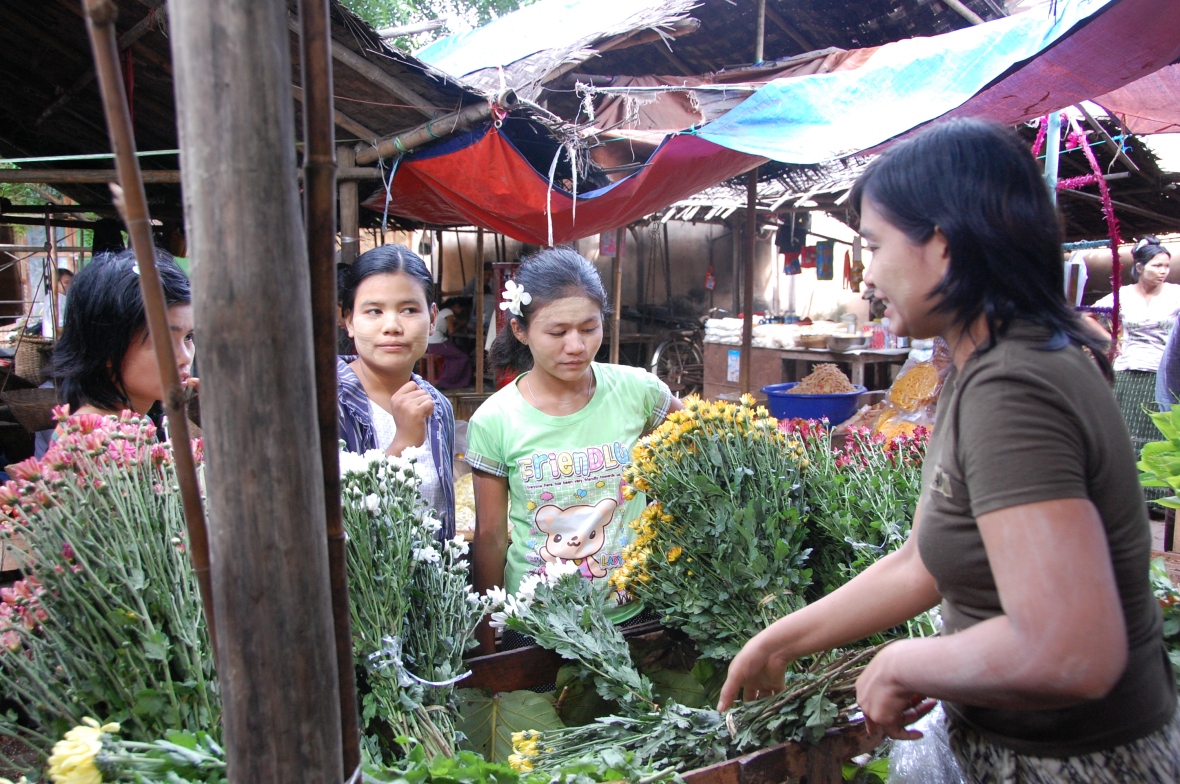 There are so many temples in Myanmar that at times you want to say “enough”, but in Yangon there is a very special one called,  Shwedagon Paya, that is very big and almost like its own village.  Here are some shots of it. 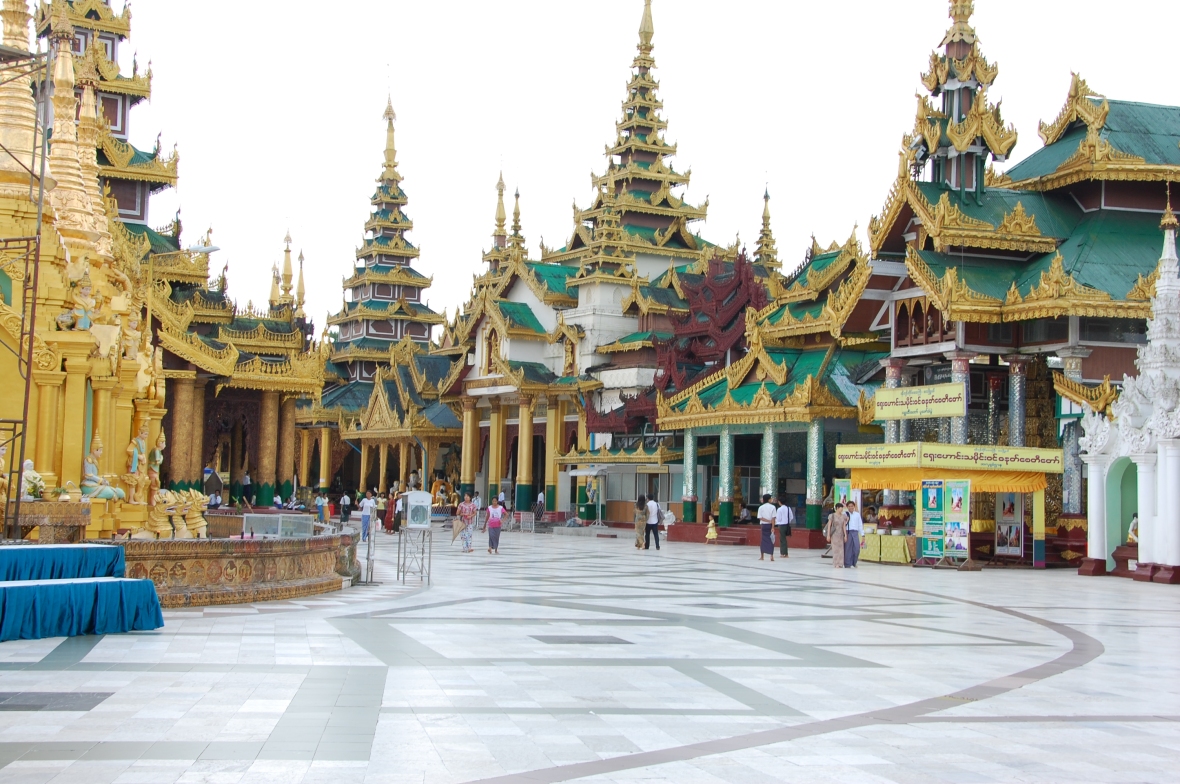 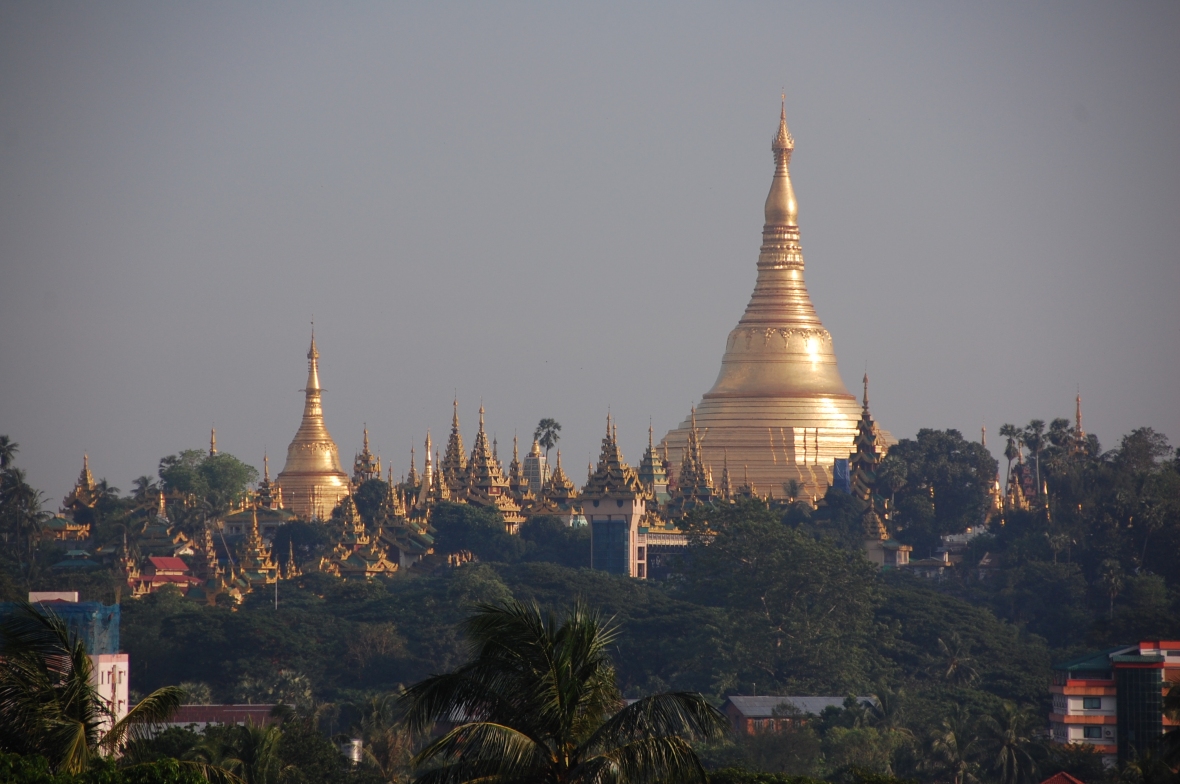 Much of what we learned about Buddhism in Bagan we learned from this man who was our guide.  He had the interesting practice of coming to the airport with the taxi drivers and then riding with the tourists back to their hotels explaining a few things and then offering his services. 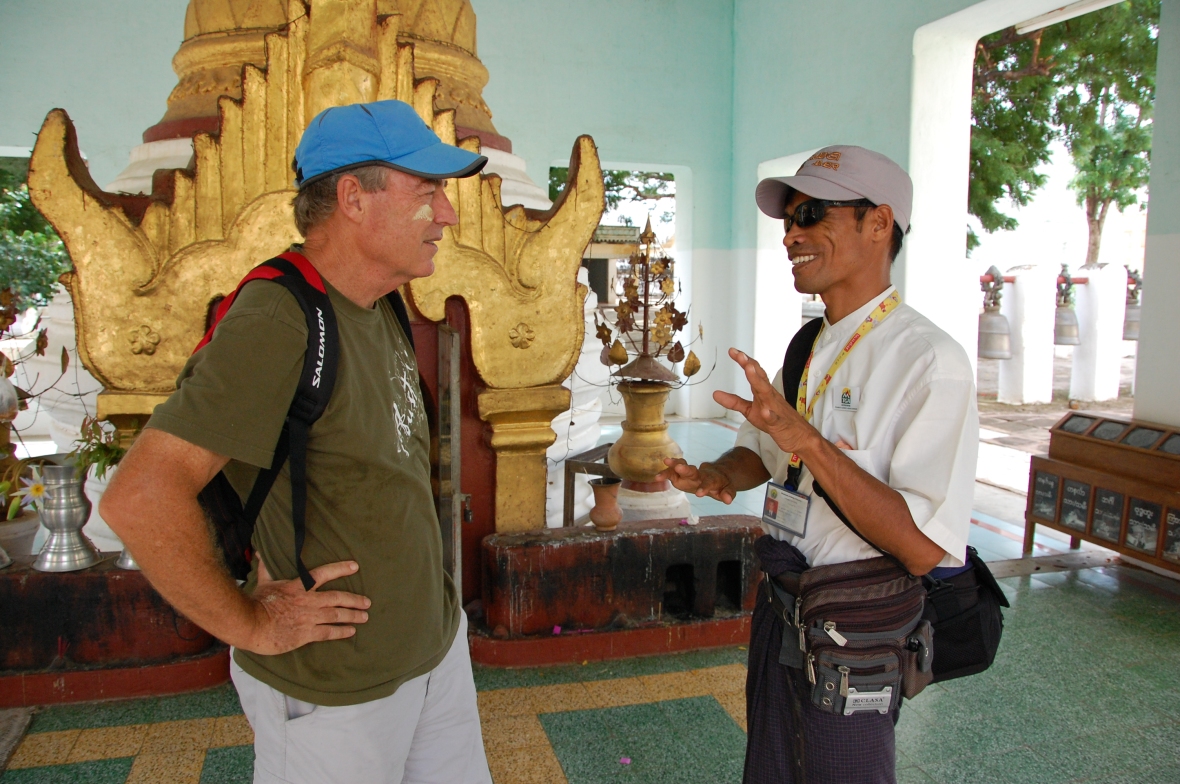 And here are some other random shots.

Puppetters at dinner show in Bagan.

← Tsunamis, Earthquakes, Volcanoes and Other Natural Disaster Dreams
Dreams and the Business World →