Posted on August 8, 2007 by dreamsforpeace 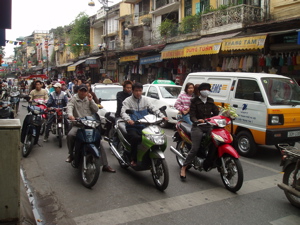 Last April my wife and traveled to Vietnam.  So here I am in the middle of Hanoi about 9 am in the morning faced with the challenge of crossing a busy street with 2 million motorcycles and no traffic lights.   This could possibly be a North American’s worst nightmare because in the U.S. pedestrians have all of the rights even when they are wrong.  Not so in Hanoi.   So I do the illogical thing and it works.  I just start walking slowly across the street without stopping.  No one hits me because they seem to know how to make space for what is happening around them.   For some reason my intuitive mind already knows this before I take my first steps.

This exercise in walking across the street fascinates my mind so I begin to think about how they are able to give me the space to cross the street.   In their minds they are trying to get from one space where they began their journey to another space where they will end it, but before they start they seem to already understand that there are many other people in the space who are also doing the same thing.  It is as if a whole culture has built itself around the idea that you can move from one space to another and respect others who are doing the same thing.

What seems ironic to me is that 90% of pop music and a large percentage of the movie industry focuses its time and energy on the value of closeness, i.e. love. which is the ability to be in the same space at the same time harmoniously with no concern whatsoever about ownership.   So, on the one hand, a part of us  values being in the same space at the same time, but the material world values separation.  If you have a lot of material space, you are worth a lot of money, but being able to share a space is not valued financially at all.  What if, instead of the amount of space being worth lots of money, the ability to share space was what determined your wealth.  Now that would be radical change.   Let’s face it people who share space well are the happiest and lead the best lives.

Have you ever noticed that dance clubs where there are so many people that you can hardly breathe and the music is so loud that you cannot have a conversation are the ones that are most valued?  What is that about?  Not too many people like to dance on a big dance floor where there are not many dancing.   There seems to be too much space which is quite discomforting.

I am just wondering why one of the world’s largest real estate moguls who has had several divorces is seen as so successful.  There are so many of his books in practically every bookstore in the world lauding his value.  So he has a lot of material space, but he doesn’t know how to share space very well.  Is that what we call successful?   I guess you may have surmised that I won’t be reading any of his books.

I am not all that against having a space I can call my own, but I really love sharing my space with others.   I have lived in the same room with my wife for the last 33 years.  Now that ought to be worth something.  Don’t you agree?   It’s certainly better than owning half of city,  but not being able to live closely with others.

Let’s see, the wealthiest man in the world is trying to give away most of his wealth to solve the world’s problem.  You gotta love that, but will he share the space of who decides what to do with the money?  I think maybe sharing space and the wealthiest man in the world is an oxymoron in today’s world, but you gotta love that he wants to give it away to help others.   Hmmm. Another radical change, sharing the space of decision making.   How many CEOs want to do that?

I wonder what other kinds of space we can share.

← Interpreting Your Own Dreams 7: You Don’t Have to Be Dreaming to be Dreaming
When You Plan, Space Comes First, NOT Time →